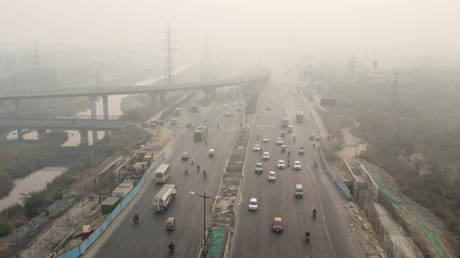 A new study has reinforced the link between the increased risk of irreversible sight loss and prolonged exposure to certain kinds of air pollution, in worrying news for heavily industrialized nations around the world.

The research, published Tuesday in the British Journal of Ophthalmology, used data from more than 115,000 participants who all reported no eye problems at the beginning of the study period in 2006.

While previous research has drawn a link between air pollution and glaucoma, as well as cataracts, this latest paper examined the link between pollution particles suspended in the air and the onset of age-related macular degeneration (AMD).

The high blood flow to and from the eyes is suspected of making the organs much more vulnerable to damage inflicted by tiny particles in the air, with a growing body of research and evidence suggesting air pollution is greatly diminishing humanity’s vision over time.

Indeed, air pollution is the leading cause of blindness in the over-50 demographic in the industrialized world, with some estimates predicting up to 300 million people will be affected by AMD by 2040.

In this latest study, researchers collated traffic pollution, nitrous oxide levels, and small-particulate matter data to produce an annual average air pollution level to which the participants were exposed in their homes.

They then underwent a formal eye examination 14 years later, on conclusion of the study, at which point some 1,286 of them were diagnosed with AMD.

The researchers found an eight percent higher risk of contracting AMD in those with prolonged exposure to air pollution.

“Our findings add to the growing evidence of the damaging effects of ambient air pollution, even in the setting of relative low exposure.”

The World Health Organization estimates air pollution is directly linked to roughly seven million deaths annually. Now, a growing body of research indicates that those who are not killed by exposure to high levels of air pollution may face an increased risk of being blinded by it.

However, Tuesday’s study was observational and therefore did not establish a causal link between air pollution and AMD, merely a correlation of the two, so more research is needed to definitively prove causality.