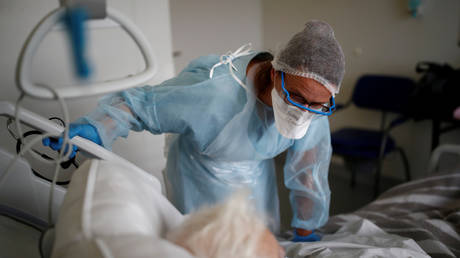 Regeneron Pharmaceuticals has said that interim results from its antibody cocktail trial have shown that the treatment is effective in preventing Covid-19 in people exposed to those already infected with the virus.

On Tuesday, the company claimed its treatment could be used as a “passive vaccine” for the prevention of Covid-19 in people at high risk of infection, such as those living in the same household as someone who has been infected with the virus.

The antibody cocktail, which was famously touted by former US president Donald Trump after his hospital stint with Covid-19, caused a 100 percent reduction in symptomatic infection and roughly lowered overall rates of infection by 50 percent, the US biotech firm said.

The findings are based on interim trial data from around 400 participants, all of whom were living with someone who had been infected with Covid-19. The full dataset is to be released in the next quarter, the company said.

“These data using REGEN-COV as a passive vaccine suggest that it may both reduce transmission of the virus as well as reduce viral and disease burden in those who still get infected,” said George Yancopoulos, president and chief scientific officer at Regeneron.

Yancopoulos said the treatment could be used to break the chain of infection by protecting those closest to people who have the virus.

Regeneron said it would be discussing interim results with US health regulators to explore expanding the antibody cocktail’s current emergency use authorization.

On Sunday, it was announced that the German government had purchased 200,000 doses of the treatment with each costing a staggering $2,400.