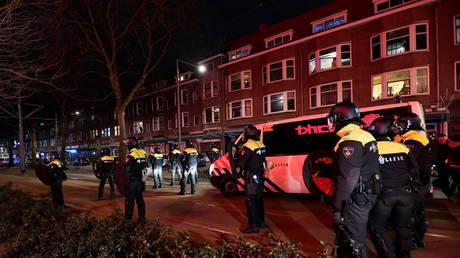 Police in the Netherlands have arrested a further 131 people, after five nights of civil unrest, as people take to the streets in anger against the government’s Covid-19 curbs.

Tuesday night was considerably quieter than the previous evenings, the Dutch police concluded on Wednesday. Of the 131 people arrested across the country, 81 were arrested for confrontations with the police in Rotterdam.

The police said most of the detainees last night were under 25 years old and were mainly charged with violence and incitement offences.

On Tuesday, the authorities reported 184 arrests in connection with the previous night’s disturbances.

Dutch cities have descended into mayhem every night for almost a week as disgruntled citizens vent their anger at the introduction of a controversial nighttime curfew meant to prevent the spread of Covid-19.

At least 500 people have now been arrested since the Netherlands imposed its first nationwide curfew since World War II.

Dutch Justice Minister Ferdinand Grapperhaus said on Tuesday that rioters would face the full force of the law and would be sent to court quickly for sentencing.

“They won’t get away with it. If you rob people who are struggling with the help of the government to keep their head above water, it’s totally scandalous,” Grapperhaus told reporters after another night of unrest that saw numerous confrontations between rioters and police, and the looting of stores in the port city of Rotterdam and the southern city of Den Bosch.

Despite the opposition to it, the justice minister said the curfew would remain.