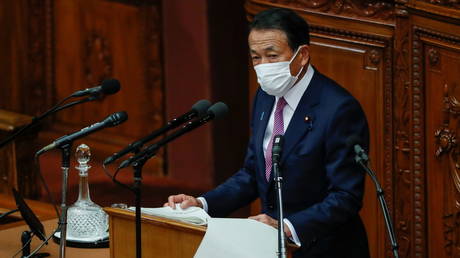 Japanese Prime Minister Yoshihide Suga has apologized to the public after members of his ruling coalition visited nightclubs, violating the country’s Covid-19 restrictions that urge people to stay at home unless necessary.

Last week, both Jun Matsumoto, from the Liberal Democratic Party, and Kiyohiko Toyama, from the New Komeito Party, were caught visiting nightclubs in Tokyo’s Ginza district despite a state of emergency having been issued in the city.

Under the state of emergency, restaurants and bars are ordered to close by 8pm and citizens are urged to only leave their homes for essential or urgent reasons. However, there are currently no fines or punishments for individuals or businesses who fail to comply with the restrictions.

Speaking in Japan’s parliament, Suga expressed remorse for the behavior of members of his ruling coalition, saying he was “terribly sorry that this happened.”

Each lawmaker should behave to gain the public’s understanding.

The two lawmakers who broke the rules have also issued apologies for their behavior, with Matsumoto describing it as “careless at a time when we are asking people to be patient.”

The controversial incident comes at a difficult time for Suga’s government, as it faces criticism for being too slow in its response to the pandemic, causing a spike in infections and risking the Olympics, which are due to begin in Tokyo in a few months, being postponed again.

Infectious disease specialist Yoshihito Niki accused the government of having “contributed to [a] rise in case numbers by people traveling around the country,” with its lax approach that encouraged individuals, particularly young people, to take the threat of the virus less seriously.

Since the start of the pandemic, Japan has reported 368,143 infections and 5,158 deaths from Covid-19, with the country seeing a significant spike at the end of 2020 that’s continued into the new year.