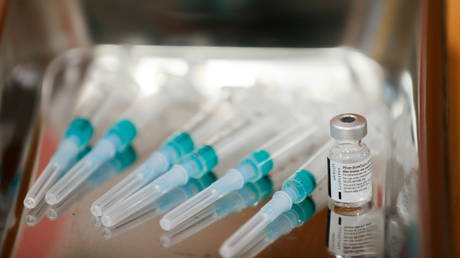 Spain’s capital region of Madrid has halted new inoculations against Covid-19 as it is running out of vaccine doses, its deputy president has revealed, adding that immunization goals are unlikely to be met due to low supply.

The region has stopped administering vaccines to new recipients, and is instead keeping a small stockpile of doses for those due to receive their second jab, Madrid’s deputy regional president, Ignacio Aguado, told reporters on Wednesday.

“Unfortunately, as we suspected, the pace of deliveries was interrupted,” he stated.

So far, the region has vaccinated some 180,000 people since the immunization campaign kicked off late in December. The Spanish government’s objective is to vaccinate around 70 percent of the country’s citizens by late June.

That vaccination goal now appears out of reach for Madrid, however, and if the supply remains poor, the region will inoculate only some 30 percent of residents by the late June deadline at best, Aguado warned.

“It is absolutely impossible and unfeasible,” he said, adding that with the current rate of arrival for new doses “it will take until 2023” to meet the 70 percent objective.

During the first phase of immunization, which targets the elderly as well as frontline health workers, some 2.5 million people across Spain should receive a jab by the end of February. So far, the country has distributed around 1.3 million doses of vaccines, with around 10 percent of recipients already having been given their second shot.Spain primarily uses the anti-coronavirus solution by Pfizer, though it has received a small batch of the Moderna vaccine as well.

The country remains among the worst affected by Covid-19 in Europe, with more than 2.6 million cases registered to date. Over 56,000 people have succumbed to the disease in Spain since the beginning of the pandemic, the latest figures by the Johns Hopkins University show.