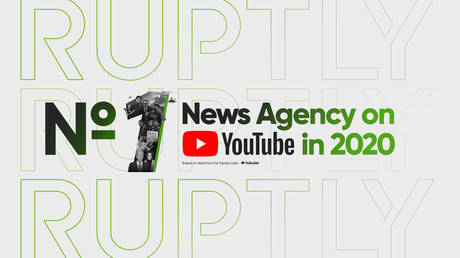 Ruptly, RT’s video agency, bested AFP, Reuters, the Associated Press and others to become the most-watched news agency on YouTube in 2020, a triumph attributed to its exclusive footage of some of the biggest stories of the year.

According to data from online video measurement company Tubular Labs, Ruptly outperformed all of its competitors, with its content receiving 429 million views over the past 12 months. The company enjoyed a comfortable lead over second-ranked Yonhap, which raked in 367 million views.

Ruptly Chief Digital Officer Dmitry Keshishev said in a statement that the figures reflect the “huge demand” for the agency’s content around the world. He went on to praise the “skill and determination of all our journalists,” noting that Ruptly has been able to source and deliver “quality content” despite the restrictions and challenges posed by the Covid-19 pandemic.

Although the health crisis has dominated headlines for months, Ruptly’s most-viewed YouTube video of 2020 was exclusive footage of a wedding in Beirut that was disrupted by the massive explosion that rocked the city on August 4. The video was seen nearly 5 million times on YouTube alone.