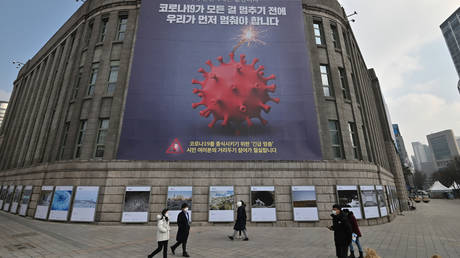 South Korean authorities have detected a spike in new coronavirus cases, traced to Christian schools and churches. The group behind the facilities, International Mission, has acknowledged failing to detect the outbreak in time.

A total of 297 Covid-19 cases were traced to six churches and schools run by a Christian organization, senior health official Yoon Tae-ho told a news briefing on Wednesday.

A major cluster of more than 100 cases was confirmed overnight among people linked to a church and its mission school in Gwangju, located some 270 kilometers (168 miles) south of Seoul. The discovery contributed to a sharp jump in the national Covid-19 tally, which grew to 559 new cases compared to 354 the day before.

The Christian organization behind the schools and churches, International Mission, has acknowledged the outbreak, apologizing for its failure to react in time when some of its students displayed flu-like symptoms.

“We deeply apologize for not responding earlier and for thinking the students could have had a cold when a student first developed fever,” it said in a statement.

The mission said it would provide the authorities with a full list of students and staff from all the schools it runs. The group was also ordered to test everyone linked to 32 of its 40 schools and churches.

Despite the new spike, South Korea remains among the nations that have fared relatively well in the pandemic. The country has only had some 76,000 registered cases of the disease, which is quite a small number given South Korea’s sizeable population of nearly 52 million. Nearly 1,400 people have succumbed to Covid-19 across the nation since the beginning of the pandemic.