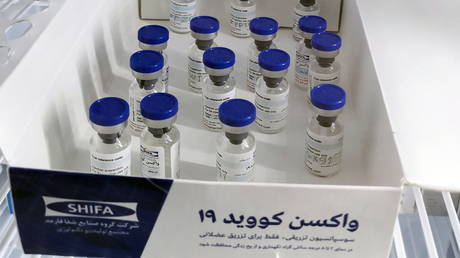 Iran won’t be using US vaccines due to a mix of public health and political concerns, instead relying on Covid-19 jabs from its allies and a homemade immunization, Foreign Minister Mohammad Javad Zarif told RT’s Worlds Apart show.

In an interview to be broadcast on Thursday, Zarif told host Oksana Boyko that the Russian jab against the coronavirus will be both “used and produced” in the country. On Tuesday, Iran became yet another nation to register Russia’s Sputnik V vaccine.

Iran’s own vaccine has gone through Phase 1 human clinical trials, with the country expecting to begin including it in its immunization campaign sometime in June, he added.

Meanwhile, the American-made vaccines from Pfizer and Moderna, which became the preferred choice of US allies in Europe and all over the world, have been rejected by Tehran.

I think it was a public health problem with some political considerations about the intentions of the US and the lack of trust, which is very clear.

Zarif recalled how cooperation with Western countries in the area of public health previously backfired for Tehran. “You know we have a very bad experience with another Western country that I don’t want to name. They sent to Iran blood that had virus” and many patients who needed transfusions became infected, he said. Although Zarif declined to name the country, it’s likely he was referring to HIV-tainted blood supplies shipped from France in the 1980s and 1990s. It was reported at the time that some 300 Iranians were infected with the contaminated blood in what became an international scandal.

Similar concerns were recently voiced by Iran’s Supreme Leader Ali Khamenei, who banned imports of US and UK coronavirus vaccines earlier this month, describing them as “untrustworthy.”

Speaking to RT, Zarif lamented that the pandemic couldn’t become a uniting factor for the world and humanize international relations. Despite Iran being the hardest hit country in the Middle East, with almost 1.4 million confirmed Covid-19 cases and more than 57,500 deaths, “the US didn’t reduce its pressure on Iran; it didn’t allow us to make financial transactions,” the FM said.

Last year, Tehran tried to make payments to join the World Health Organization’s global vaccine distribution program, COVAX, on three different occasions, but all attempts were derailed by the US sanctions campaign, he said.

But on the other hand, the US sanctions have given Iran an “advantage” during the pandemic, as they forced the country to develop its own pharma industry. Essential drugs, coronavirus test-kits and face masks, which Tehran would not have gotten due to the restrictions – “we produced all of it in Iran,” Zarif said.

Sanctions have actually helped us to stand on our own feet…we want cooperation with the world, but we don’t want to be dependent on it.