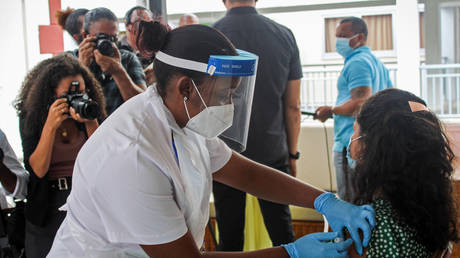 A handful of African countries have begun mass-vaccination campaigns against coronavirus, the African Union’s (AU) health chief has said. The continent has a modest goal of vaccinating some 30 percent of its population this year.

Africa, which is currently facing its second wave of Covid-19, has slowly embarked on a mass-vaccination drive against the deadly virus, the director of the AU’s disease control and prevention body, John Nkengasong, told a press conference on Thursday. So far, only Morocco, Egypt, the Seychelles and Guinea have begun their vaccination campaigns, with the latter vaccinating only a handful of people.

“Guinea is very limited, just about 50 to 60 vaccinations have occurred. But these other countries have started mainly with the vaccine from China,” Nkengasong stated.

The AU, which brings together all the sovereign states located on the African continent, has so far secured 270 million doses of anti-coronavirus vaccines. It has also signed an agreement with India’s Serum Institute for 400 million additional doses of AstraZeneca’s vaccine that is being produced in India, Nkengasong revealed.

The figures might appear impressive, yet they still fall far behind what the continent needs, as its estimated population surpasses the 1.2 billion mark – and each person needs two jabs. It also remains unclear exactly how the available vaccines are being shared out among the different AU member states.

While the continent’s mass-vaccination drive has been going on very slowly, primarily due to a lack of vaccines, at least one country – Tanzania – has actively opposed it. Tanzanian President John Magufuli is a prominent corona-skeptic who has actively discouraged mask-wearing and social distancing, going so far as to claim that vaccines are a tool of foreigners to spread diseases and steal African riches.

“We in Tanzania managed to stay for a year without corona. Even here, no one has put on a mask. Our God is beyond Satan and Satan will always fail using different diseases,” the president said on Wednesday.

Indeed, the Covid-19 situation in Tanzania largely remains a mystery, as the country has not provided any statistics since early 2020 when it had around 500 cases. Lack of data and the president’s rather eccentric stance have garnered Tanzania special attention from health officials, who have urged the country’s authorities to trust science.

“We particularly encourage the government of the United Republic of Tanzania to prepare for the vaccine, to put in place the preventive measures to protect their population, & to share data on the Covid-19 situation,” World Health Organization’s (WHO) Africa director Matshidiso Moeti said during a press briefing. “Science shows that vaccines work.”