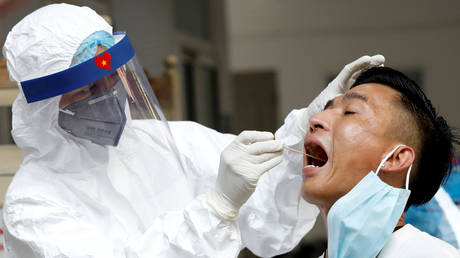 Three new field hospitals will be built in the northern Vietnamese province of Hai Duong, the government said on Thursday after the country reported its first Covid-19 outbreak in 55 days.

The government did not specify the size of the hospitals, but local media reported they will be located at a university, a medical center and a sports stadium; and will provide treatment for Covid patients.

The Vietnamese health minister on Thursday reported 83 new Covid-19 infections in total – the country’s highest ever daily increase throughout the pandemic.

One of the new cases was a person who had contact with someone who had tested positive in Japan for the more infectious B117 variant of the virus, which was first detected in the UK late last year.

The new outbreak was confirmed on Thursday across the northern provinces of Hai Duong and Quang Ninh, near the capital Hanoi, and is the first since multiple infections were reported in the central city of Danang in July. The July cases resulted in Vietnam’s first Covid-19 deaths.

The Health Ministry is now testing tens of thousands of people and has proposed banning large gatherings and shutting down international air travel, according to Reuters.

Vietnam has staved off the worst of the pandemic by effectively shutting its borders, as well as using tough quarantine measures and extensive testing and tracing.

In total, the country has registered just 1,600 Covid-19 infections and 35 deaths since the start of the pandemic.

Australian think-tank the Lowy Institute this week described Vietnam’s Covid-19 response as the second-best in the world, after New Zealand, according to its Covid Performance Index of 98 countries and territories.