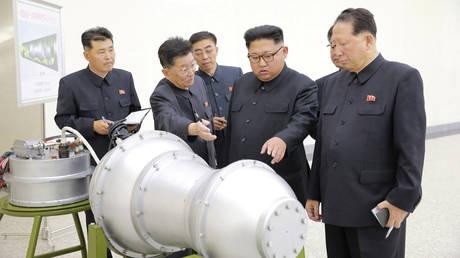 South Korea’s PM Chung Sye-kyun has urged all sides of the Korean standoff to show “creative” thinking, urging the North to at least freeze all its nuclear activities and scale down its program, to show goodwill.

The bold proposal was floated by Chung in a major interview with Reuters published Thursday. The premier urged all the sides in the decades-long standoff to engage in dialogue, stressing that it’s the only way to reach an intra-Korean settlement.

“Everyone knows that the problem cannot be solved without dialogue,” Chung stated. “Our job is to come up with creative ideas so that talks will be held as quickly as possible.”

The proposed “creative” approach might include a full freeze of North Korea’s nuclear program, the PM said, adding that a full and complete de-nuclearization would be an even better, though unlikely, outcome.

We can begin with a freeze in all nuclear activities and a reduction of some of their program. It would be best if we could get rid of all of it, once and for all, but it’s not easy and we need an alternative.

North Koreans, in turn, may expect a partial lifting of international sanctions. “South Korea and the United States know what North Korea wants,” the PM stated.

Apart from that, Chung said his country expects to discuss the revival of the Korean negotiations with the US soon, as well as to consider scaling back or postponing joint military drills. The exercises have been repeatedly condemned by Pyongyang as saber-rattling and an open threat to the country.

While the new US administration has not unveiled its stance on the Korean Peninsula issue so far, Chung’s remarks appear to be in line with earlier statements by President Joe Biden. During his election campaign, Biden said he would meet the North’s leader Kim Jong-un only if the country moves to “draw down” its nuclear program.

Pyongyang has repeatedly refused to take major unilateral steps in exchange for vague promises of scaled-down drills or sanctions relief. Speaking at a major meeting of the ruling Workers’ Party of Korea, Kim Jong-un clearly signaled he was not holding his breath about the change of the US administration either and expected the “barbaric” US polices to stay under Biden.

“No matter who is in power in the US, the true nature of the US and its fundamental policies towards North Korea never change,” Kim said.