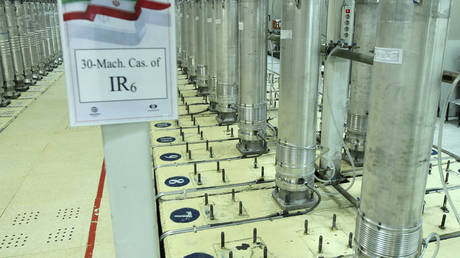 By the end of the month, Iran will have exceeded 17 kilograms of 20-percent-enriched uranium, the country’s state TV said on Thursday, in a move that leaves the return to the 2015 nuclear deal in jeopardy.

Iranian Parliament Speaker Mohammad Bagher Qalibaf announced the news during a televised speech as he visited the Fordo nuclear plant in northwestern Iran.

The Iranian Parliament passed a bill in December, requiring the country to produce and store 120 kilograms of uranium enriched to the 20-percent level each year – or an average of 12 kilograms per month.

The 17 kilograms of 20-percent-enriched uranium is therefore a significant increase on Iran’s goals, although its enrichment is still not near the 90-percent level required for weapons-grade uranium.

Western leaders have criticized Iran’s nuclear activities, especially former US president Donald Trump, who, in 2018, withdrew the US from the Joint Comprehensive Plan of Action (JCPOA), the nuclear deal signed in 2015.

President Joe Biden has said he hopes the US can return to the deal, which limits Iran’s uranium enrichment to the 3.67-percent level in return for sanctions relief from the US and the European signatories of the agreement.

However, Biden wants Iran to show compliance with the JCPOA before easing US sanctions, while Iran is pushing for sanctions relief before it adheres to the accord, effectively leaving the two nations at a standstill.

Earlier this week, Iran threatened to block inspections of its nuclear sites by the UN’s International Atomic Energy Agency from mid-February, which would amount to another breach of the JCPOA.