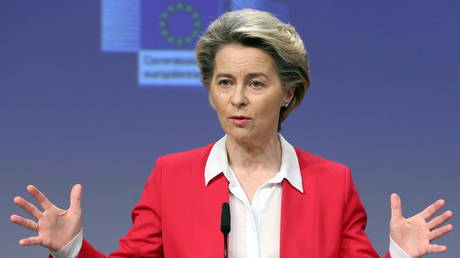 The European Commission has published a redacted version of the EU’s contract to procure millions of doses of the Covid-19 vaccine produced by AstraZeneca amid a bitter row between the two parties over supply shortages.

It comes after Brussels threatened the Anglo-Swedish pharmaceutical giant with legal action, following AstraZeneca’s recent announcement that it would cut EU deliveries from 80 million to 31 million, due to manufacturing issues in Europe.

The two parties have since sparred over whether the company is legally required to adhere to set timeframes with its vaccine deliveries to the EU, and therefore whether AstraZeneca is in breach of its contract.

The document, published by the bloc’s executive on Friday in agreement with the biotech firm, reads: “AstraZeneca has committed to use its best reasonable efforts to build capacity to manufacture 300 million doses of the vaccine… with an option for the Commission… to order an additional 100 million doses.”

The “best reasonable efforts” clause has been a particular point of contention in the row, and the EU has said that the idea that AstraZeneca is not obliged to deliver because of the contract’s wording is “neither correct nor acceptable.”

The contract defines “best reasonable efforts” of AstraZeneca in terms of the activities that would be taken by a company of a similar size, while for the EU it talks about the effort that governments would use in supporting a vaccine contractor.

The redacted sections of the contract include the estimated costs, as well as a table denoting the estimated EU delivery schedule for doses of the vaccine.

“’Best effort’ was valid while it was still unclear whether they could develop a vaccine,” she added. “That time is behind us. The vaccine is there.”

The EU has said it should receive UK-made doses of the vaccine to make up for AstraZeneca’s shortfall at its plants in Belgium and the Netherlands, but UK Minister Michael Gove has rejected any such move, saying there “will be no interruption” to UK supplies.

However, the UK’s first deliveries of the AstraZeneca vaccine actually came from Europe, the government’s manufacturing lead for the Vaccine Taskforce, Ian McCubbin, confirmed in December.

On Friday, UK Prisons Minister Lucy Frazer said that the British government would not publish its vaccine-supply data, for “security reasons,” despite the Scottish government pledging to release its figures amid the vaccine tension across Europe.