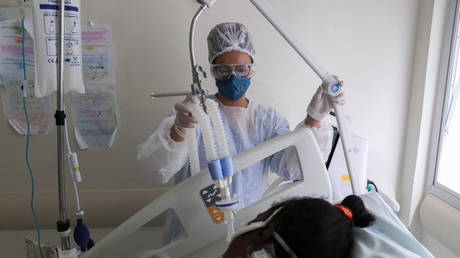 A study in Brazil has found two patients infected by two strains of the novel coronavirus at once. Such cases, in turn, can generate even more new strains of the virus, researchers say.

The researchers at Freevale University’s Molecular Microbiology Laboratory have studied the genetic samples from 92 Covid-19 patients across the country’s southern state, Rio Grande do Sul.

They found that two patients in their thirties had each been simultaneously infected with two different strains of the novel coronavirus. Both cases were initially reported in late November.

Ana Tereza Vasconcelos, a coordinator at Brazil’s National Laboratory for Scientific Computing, told Brazilian media that both patients only had mild to moderate symptoms and recovered without being hospitalized.

“These co-infections can generate combinations and generate new variants even more quickly than has been happening,” the study’s lead researcher Fernando Spilki told Reuters. “It would be another evolutionary pathway for the virus.”

Overall, the scientists discovered that five different variants of the coronavirus were circulating in Rio Grande do Sul, including a new one, which has been labelled VUI-NP13L.

The emergence of new variants of the coronavirus have increased concerns over the spread of Covid-19 worldwide, and created fears that they can undermine ongoing vaccination campaigns. Officials in Britain, France and Germany recently cited the more transmissible B.1.1.7 variant, which was first discovered in the UK, as one of the reasons for tightening movement restrictions.

More than 300 cases of B.1.1.7 have already been recorded across the US, according to the Centers for Disease Control and Prevention.

The World Health Organization head Tedros Adhanom Ghebreyesus warned earlier this month that variants with higher transmissibility can “drive the surge” of cases and hospitalizations, which is “highly problematic” for healthcare systems, especially those getting overwhelmed with the influx of Covid-19 patients.