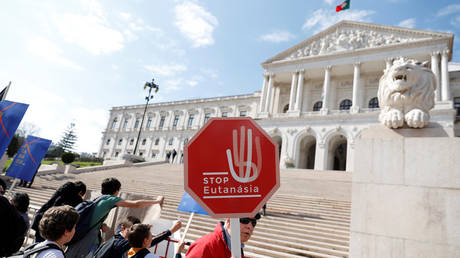 Euthanasia is to become legal in Portugal after the country’s parliament voted on Friday to allow terminally ill patients to seek assistance from a doctor to end their lives, becoming only the seventh nation in the world to do so.

The euthanasia law was passed with 136 votes in favor, 78 against, and four abstaining.

The move means that people over the age of 18 can request assistance to die if they are suffering from “lasting” and “unbearable” pain. The law states that only national citizens and legal residents will be able to request medical assistance to end their lives.

Politicians voted in favor of proposals aimed at changing the law in February 2020, setting up Friday’s vote despite opposition in the Catholic-majority country and a campaign by the Church for a national referendum on the issue.

The timing of the vote has also come into question with opposition party PSD (Social Democratic Party) seeking to postpone it, claiming the Covid-19 pandemic had created “great anxiety, great fear among people that has to do with issues of life and death.”

However, parliamentary leader of the People-Animals-Nature party, Ines Real, rejected this criticism, noting: “It is dishonest to invoke an extremely difficult moment in the country… to confuse deaths related to Covid-19 with the legislative process that aims to allow euthanasia to those suffering.”

The final step in the legalization process rests with President Marcelo Rebelo de Sousa, who previously said he would respect parliament’s vote and sign the measure into law.

Neighboring Spain also legalized euthanasia in December under strict conditions and despite fierce opposition from the Church and conservative parties.