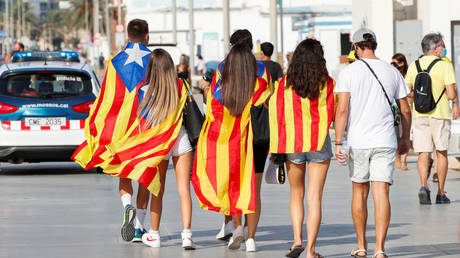 A Spanish court ruled on Friday that postponed regional elections in Catalonia must go ahead next month. The ruling puts the restive province’s independence drive back on the national agenda in a nation preoccupied with Covid.

The Catalan government – a coalition of two pro-independence parties – wanted to postpone the vote until May 30 due to the ongoing pandemic, but a Barcelona court decision annulled the change of date.

The province has previously held two plebiscites on independence, in 2014 and 2017. The polls, which were each declared illegal by Spain’s Constitutional Court and largely ignored by federalists, returned majorities in favor of separation.

The most recent plebiscite sparked huge protests as riot police were dispatched to the region to prevent people casting their votes. It also led to the eventual jailing by Spain’s supreme court of some separatist leaders for sedition, while others sought exile in Belgium.

On Tuesday, Spain’s federal health minister Salvador Illa quit his position to run as the Socialists’ lead candidate in the province. The party is seeking to capitalize on his popularity as opinion polls indicate he could win the Socialists between 30 and 35 seats. In the last Catalan elections, the Socialists won just 17 seats.

The polls also indicate a close fight between pro- and anti-independence parties.