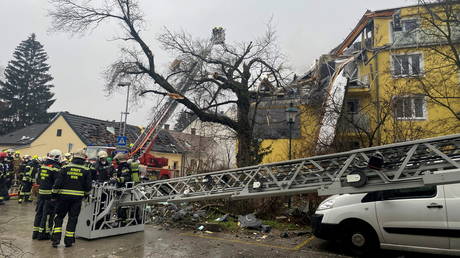 An apartment building in Langenzersdorf near Vienna partially collapsed on Friday morning after an apparent explosion started a fire that ripped through the top of the four-story building.

A witness reported hearing a blast around 8am local time, which was confirmed by a police spokesperson, who stated that “it appears to have been an explosion.” While there has been no information as to the cause of the incident, the State Criminal Police Office are looking into whether it was a gas leak.

Emergency services, including fire brigades, helicopters and ambulances, were seen on-site. So far, one person who was seriously injured and two people with minor injuries have been rescued from the building. The injured have been transferred to local hospitals for treatment and further assessment. As entering the property is still too dangerous, it’s not yet clear if there are more individuals inside.

Mayor Andreas Arbesser claimed the building looks “like after a bomb hit,” saying the situation is “terrible” and all individuals impacted by the situation will be given accommodation and essentials at the community hall.

The area surrounding the building has been temporarily cordoned off while firefighters bring the blaze under control and ensure that there is no further risk to residents.