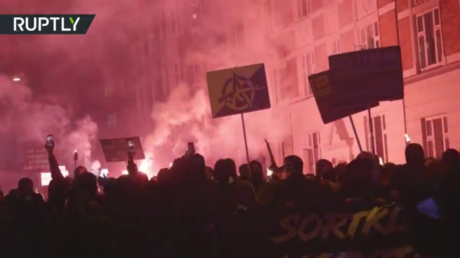 The fiery protest was staged overnight in Aarhus, the second largest city in Denmark. The march was organized by a group, calling themselves the ‘Men in Black’, who oppose the country’s enduring anti-coronavirus measures.

Many protesters showed up for the march with lit torches and flares. Some of the protesters got rowdy and launched several fireworks at the police who closely monitored the gathering.

At least one person was arrested during the protest, while several others were briefly held by the police for questioning and “educational” talks.

Several large banners were displayed at the event, taking jabs at the government’s anti-coronavirus policies. ‘Close Christiansborg, open society’ one of the banners read, referring to the government building in Copenhagen.

Denmark has recently toughened its anti-coronavirus restrictions, reducing gatherings’ limit to five from 10 people. Entertainment venues, as well as restaurants and bars, remain closed across the country.

Another banner was aimed personally at the country’s PM, reading ‘Better a dead mink as a playmate than Mette Frederiksen’. The ‘Men in Black’ group appears to hold a strong grudge against Frederiksen and last Sunday it went as far as burning an effigy of the PM during a protest.

The mink reference apparently poked fun at the country’s mink disaster, which unfolded late in 2020. After the animals at multiple farms contracted coronavirus – passing it back to humans afterwards – Denmark’s government took an unprecedented move and ordered extermination of the entire stock.

Mass graves of the minks, which dotted the country, have prompted widespread concerns about groundwater pollution. Moreover, several burial sites have seen mink literally rising from their graves due to corpse gases and had to be reburied, while tons of animal corpses were left unaccounted for.

So far, Denmark has registered nearly 200,000 cases of coronavirus including more than 2,100 deaths. While figures remain relatively low compared to the worst Сovid-hit countries, they are still quite sizable for the 5.8 million Nordic nation.