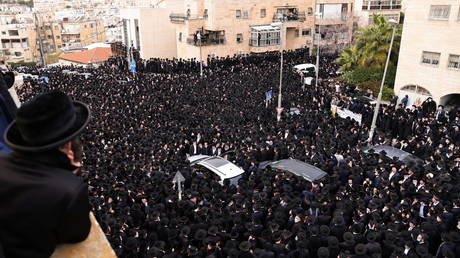 A sea of people filled the streets of Jerusalem as thousands of Orthodox Jews paid their last respects to a local rabbi despite the Covid-19 lockdown. The authorities said it was “a funeral that would lead to more funerals.”

Rabbi Meshulam Dovid Soloveitchik, the head of Brisk Yeshiva religious school and a powerful voice in the Haredi society, passed away early Sunday at the age of 99. He was infected with the coronavirus three months ago, but on Friday his condition took a turn for the worse.

Israel is currently in its third coronavirus lockdown, and the authorities put a lot effort into preventing a large funeral gathering, setting up road blocks and engaging in negotiations with religious leaders to talk their followers out of attending. Twenty busses heading to the ceremony were stopped and turned back by the police, according to local media.

But it was all in vain as thousands of Orthodox Jews flooded the streets of Jerusalem later in the day. The massive funeral procession departed from Soloveitchik’s home in the Sanhedria neighborhood and proceeded to the Har HaMenuchot cemetery.

The gathering was “very bad in every way,” Deputy Health Minister Yoav Kisch tweeted. The Haredi funeral shows that both the public’s attitude to the restrictions and the ability of the police to enforce them are “poor.”

A funeral with a failed health score. A funeral that will unfortunately lead to more funerals. Then they wonder why the lockdown does not reduce the infection rates.

Orthodox Jews have been notable in their opposition to the restrictions during the pandemic, refusing to abide by rules that hinder their religious practices. Orthodox protests occur in the country almost every week, typically ending in clashes and arrests.

The Haredi community was hit hard by the coronavirus, with experts saying that neglecting the health rules and mass gatherings have led to this alarming state of affairs.