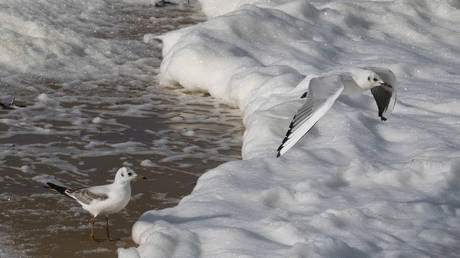 A huge mass of sea foam covered parts of Ireland’s east coast. Bad weather and high winds blew an especially large mass of it into the town of Bray, located south of Dublin.

Footage from the scene circulating online shows the town’s seafront entirely covered with the wobbly blob on Saturday afternoon.

A few people braved the strong winds, taking a knee-deep stroll through the blob resembling a massive porridge spill.

The mix of sea water and dead organics covered Bray’s beach completely, with some of the foam being blown deeper into the town.