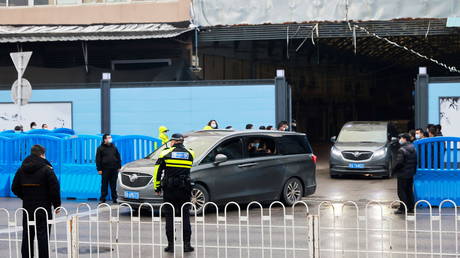 A team of experts from the World Health Organization (WHO) investigating the origins of the coronavirus pandemic has visited a seafood and live animal market in Wuhan which was linked to the first detected clusters of the disease.

The team visited the now-shuttered Huanan Seafood Market on Sunday. The sprawling market has seen its security tightened, with additional barricades erected and more guards deployed in the area ahead of the high-profile inspection.

The experts spent around one hour at the location before leaving it in convoy. The team did not approach the press, who had amassed outside the market’s security barrier.

The WHO’s fact-finding mission began its work in China’s Wuhan on Thursday after getting discharged from a two-week quarantine. The experts have already visited several hospitals and markets, as well as an exhibition commemorating Wuhan’s battle against the initial outbreak of coronavirus.

Huanan Market made the headlines late in 2019, when the facility was shuttered after four cases of mystery ‘pneumonia’ – which turned to be Covid-19 – were linked to it. The market itself, as well as the controversial trade in such exotic animals as bats and pangolins, has been widely theorized to be the root of the pandemic, though no solid proof for such claims has emerged as yet. Moreover, mounting reports suggest that the dreaded virus was present in multiple countries around the world months before it was first detected and identified in Wuhan.

The ongoing pandemic, which has been plaguing the globe for over a year, has already killed over two million people and heavily battered the world’s economy. More than 100 million people have contracted the disease, the latest figures by the Johns Hopkins University show.