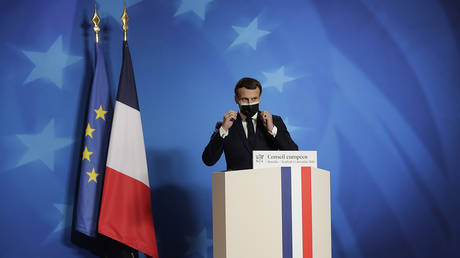 Europe must act more quickly and efficiently in its Covid-19 vaccine rollout, French President Emmanuel Macron said on Monday after a week of turmoil in which the EU sparred with the UK and AstraZeneca over shortages.

“We are in a race against time against the virus,” the French leader said in Paris, as he met with Serbian President Aleksandar Vucic.

We, as Europeans, need to be more efficient on this matter. I know this is also the intention of Chancellor [Angela] Merkel and [Commission] President [Ursula] Von Der Leyen. We will continue in the coming weeks and months to speed things up.

Last week ended with France and Germany threatening legal action against AstraZeneca if it emerged that the company had given preferential treatment to Britons over EU citizens in its allocation of Covid-19 vaccine doses.

The British-Swedish pharmaceutical giant initially drew the ire of Brussels more than a week ago with its announcement that it would cut vaccine supplies to the bloc by 60 percent, from 80 to 31 million doses, in the first quarter of the year, citing production issues in Europe.

A row then raged between the two parties, as the EU said the advanced purchase agreement it has with AstraZeneca, worth €336 million ($407.8 million), must be honored.

Brussels imposed export controls on vaccines produced within the bloc, meaning companies like AstraZeneca need to get prior EU approval before shipping vaccines to third countries such as the UK.

The Commission said the measure only applies to the allocations covered in its advance purchase agreements with biotech firms.

Last week, Macron was among the EU leaders pushing for border controls to stop European-made vaccines heading to Britain, explaining that the bloc was receiving “fewer deliveries that do not honor the contractual engagements agreed.”

Amid the fury over AstraZeneca cutting vaccine supplies to the EU, the French president also lashed out at the efficacy of the jab itself, telling reporters on Friday that it is “quasi-ineffective for people over 65.”

The comments drew widespread backlash from politicians and the scientific community, including Professor Anthony Harnden, a member of the UK’s Joint Committee on Vaccination and Immunisation (JCVI).

“In my view the politicians need to understand the science before they make utterances like that,” he told Good Morning Britain on Monday.

The EU’s drugs regulator, the European Medicines Agency (EMA), approved the AstraZeneca vaccine last week for use in people aged 18 and over.

Most participants in four clinical trials conducted prior to approval were aged 18-55, but the EMA said that although there are “not yet enough results” for the over-55s, “protection is expected,” due to the immune response seen among this group in other studies.