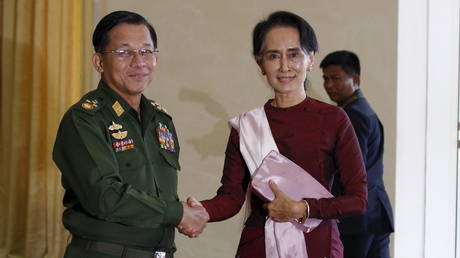 Nyunt added that several other senior civilian officials, including formal head of the the state – Myanmar’s President Win Myint – were allegedly taken into custody.

Nyunt, who told Reuters that he expected to follow in their footsteps, urged the public to refrain from any response to the developments that could put them in violation of the law.

“I want to tell our people not to respond rashly and I want them to act according to the law,” he said.

The reported detentions of high-ranking officials came as the civilian government of Suu Kyi has been increasingly at odds with the powerful military, alleging fraud in the county’s November general elections that Suu Kyi’s governing party said it won in a landslide.

The newly-elected bicameral legislature, where the Suu Kyi-led NDL secured 396 seats out of 476, was to convene on Monday for the first time. During its inaugural session, the lawmakers were set to elect the new president and the vice presidents for the next five-year period.

The result of the November vote dealt a blow to the military-backed Union Solidarity and Development Party, which had to contend with 33 seats.

The military has since repeatedly cried foul over the outcome of the elections, urging electoral officials to review the final tally. The military insisted that the vote was riddled with fraud, claiming they’ve found evidence of as many as 8.6 million irregularities in voter lists.