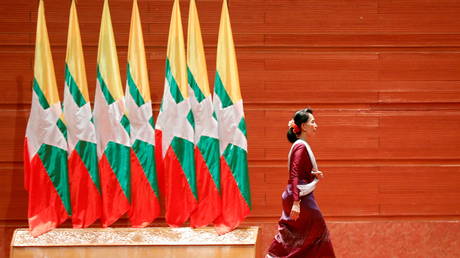 Myanmar’s residents have reported issues with internet and phone lines, and a state-run TV channel was forced to cut off broadcast over transmission problems amid reports of de-facto Myanmar’s leader Aung San Suu Kyi’s arrest.

State-run Myanmar Radio and Television (MRTV) reported early Monday morning local time that it could not stick to its regular programming schedule due to ongoing and unspecified “communication difficulties.”

This came shortly after spokesman for Suu Kyi’s National League for Democracy party announced that she and a number of other senior civilian officials had been apparently detained by the military.

“With the situation we see happening now, we have to assume that the military is staging a coup.” NLD spokesman Myo Nyunt said, as cited by AFP.

There have been unconfirmed reports in the media that the military took over the channel.

Our correspondent in Yangon says that the military has just seized the government-owned national broadcaster MRTV.

Phone data has also been cut off with only wifi working now.

We will keep updating you as long as he can send messages to us. #Myanmar #standwithmyanmar pic.twitter.com/XsoQM2eqBV

WhatsApp and Viber can still be used

I’m getting reports from inside #Myanmar #Yangon that phone networks are completely down & people are afraid to go outside. Only those with Wi-Fi connection can still communicate. I’ve also been told (unable to confirm independently) that #military has surrounded #MRTV state TV pic.twitter.com/0JlKFMI1G9

I am in Yangon and military have taken control over the organs of state this morning. Please retweet as much as you can as we are being cut off from all the means of communications to connect outside world.

The Myanmar Times reporter John Liu tweeted that mobile internet and phone lines appeared to have been disrupted.

“Now mobile internet and phone lines are cut, only home wifi and military-operated phone line working. Having a hard time reaching my colleagues in Yangon,” he tweeted.

Now mobile internet and phone lines are cut, only home wifi and military-operated phone line working. Having a hard time reaching my colleagues in Yangon.

NetBlocks, a non-government organization which tracks Internet disruptions and shutdowns, reported a plunge in connectivity levels in Myanmar on Monday morning, saying that they dropped to some 50 percent of “ordinary levels” as of 8.00 a.m local time.

Update: Internet connectivity in #Myanmar has fallen to 50% of ordinary levels as of 8:00 a.m. local time amid an apparent military coup and the detention of civilian leaders; pattern of disruption indicates centrally issued telecoms blackout order ?

The communication problems are taking place amid reports that a spate of high-ranking civilian officials have been detained by the military.

The government of Suu Kyi, who has been de-facto civilian leader of the country since 2015, is at loggerheads with the powerful military, known as the Tatmadaw, over the result of the November general elections that the NDL won in a landslide. Tatmadaw alleged widespread fraud, and demanded the electoral commission review the results. On Thursday, the electoral board, however, poured cold water on the claims, insisting the election had not been rigged.