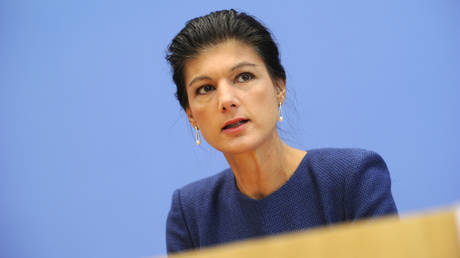 Germany could end up divided like the US if the country’s left won’t stop with moralizing and attempts to suppress any opposing opinions, Sahra Wagenknecht, former Left Party leader, said in a harsh attack on her own allies.

The “increasing intolerance” of the German liberals may have catastrophic consequences for the country, Wagenknecht warned in an interview with Die Welt. Branding anybody with a different stance, “a Nazi who should be ‘canceled’” was no way to go, she added.

“This is a typical approach of the left-liberal milieu: anyone, who is in favor of restricting immigration, is a racist; anyone, who criticizes CO2 taxes, is a climate change denier; and anyone, who doesn’t think that schools, restaurants and gyms should be closed, is a ‘Covidiot,’” she said.

This “self-righteous attitude,” which already cost the Left Party a lot of votes, is being promoted by the “new academic middle class” in the major cities. However, one must understand that those are “a relatively privileged group” that “lives in a largely isolated filter bubble,” Wagenknecht insisted.

Everyone – from the conservative to the left spectrum – who has an interest in our country not ending up in extreme division like the US– should regain the ability to engage in discussion with decency and respect.

The politician, who was the Left party’s leader in the parliament between 2010 and 2019 and remained a strong voice in the party, said she fully shared the concerns over the continuing narrowing of the spectrum of opinion, recently voiced by Noam Chomsky, Salman Rushdie and other intellectuals.

The Left are going to run for the Bundestag again this September, with Wagenknecht urging her fellow party members to finally give up on moralizing and cancel culture. “Our policies must focus on social problems, not language contortions and lifestyle issues,” she said.