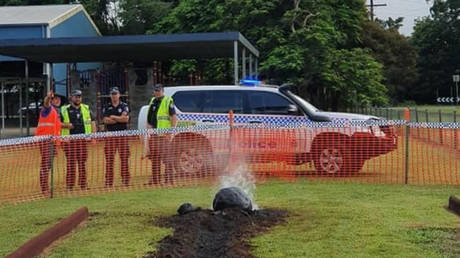 Social media was ablaze with wild speculation about a fallen meteorite which had allegedly landed in the playground of a school in Far North Queensland, with NASA reportedly called in to investigate. But all was not as it seemed.

A slew of anecdotes and theories emerged online, as people rushed to find out more information. It didn’t take long, however, for the amateur astronomers to be somewhat underwhelmed to discover the true, far more mundane origins of the ‘space rock’.

“We have had all sorts of inquiries from all around the world,” said Malanda State School principal Mark Allen, before breaking the real news that the viral meteorite strike in its playground was actually a school project.

Allen described the exercise as a “bit of fun” in which students at the school were asked to “report” on a meteorite landing as part of an assignment which tasked them with interviewing witnesses and emergency services at the scene, with someone reportedly deciding to take the initiative and bring the case all the way to NASA.

“The local police loved to get involved for the school and the kids to make it more realistic,” local resident Daniel Moss explained. “This is a small town, they didn’t expect it [the school project] to go viral.”