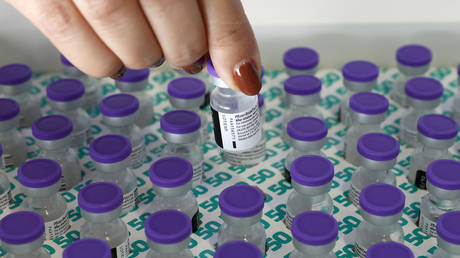 Officials in Israel are expanding its Covid-19 vaccination program to include all citizens aged over 16. Despite the ongoing mass vaccine rollout, however, the country has experienced a new surge in coronavirus cases and deaths.

The Ministry of Heath of Israel issued an order on Wednesday to provide the entire adult population with vaccines, starting from Thursday. While vaccinations have so far been primarily focused on the elderly, now the campaign will include anyone aged over 16.

Children aged between 12 and 16 are expected to be added to the inoculation rollout starting in April, Israel’s Deputy Health Minister Yoav Kisch told local radio station 103 FM. Younger citizens will be vaccinated at some point in the future as well, although, due to complexity of the approval process, including the under-12s “will take at least another year.”

So far, Israel has vaccinated around 35 percent of its nine million population. As of Wednesday, more than 3.2 million Israelis have received their shot of Pfizer vaccine, with nearly 1.9 million already getting the second dose.

Despite the speedy vaccination, however, the deceleration of the Covid-19 spread has seemingly stalled in the country over the past few days. On Monday, for instance, more than 8,800 new cases were detected, effectively bringing the country back into levels seen in mid-January, when its daily tally hovered around the 9,000 mark.

Health officials have already sounded the alarm over the spike, blaming it on mutated and highly-contagious strains of the virus. Speaking to Kan radio on Wednesday, the national pandemic response coordinator, Nachman Ash, said the decrease in the Covid-19 spread has effectively stalled.

“The reduction in morbidity has rather halted,” he said.

Moving to vaccinate younger Israelis could prove an additional challenge, Ash noted, in that those facing lower risk from Covid have less incentive to get the jab than their older compatriots. “I think that, naturally, the more we go down from ages at which the risk is higher, more effort has to be made to bring the population out to get vaccinated,” he stated.

Israel has been heavily hit by the pandemic, registering over 660,000 Covid cases to date and nearly 4,900 deaths. The figures, ballooning despite repeated lockdowns and containment efforts, have repeatedly prompted accusations against the Israeli authorities of badly mishandling the crisis and further fuelled weeks-long protests against the rule of PM Benjamin Netanyahu.