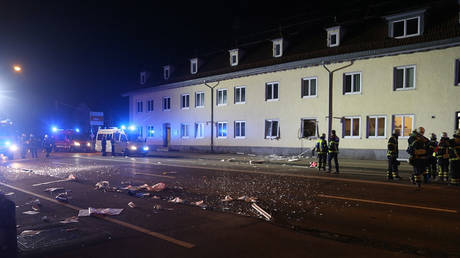 A blast has occurred at the German Red Cross building in Memmingen, leaving five in need of medical attention. Police say another explosion cannot be ruled out, and have evacuated the surrounding area.

Emergency services personnel are searching for further gas leaks after the incident at the organization’s building, which occurred at around 6am local time. The police and rescue services were immediately summoned to the scene.

All buildings within a 500-meter radius have been evacuated, the news platform Allgäuer Zeitung reported, with police attributing the explosion’s cause to a defective gas pipe that lay under the street in front of the Red Cross offices. The authorities say another explosion cannot be ruled out.

Images from the scene show a number of windows cleanly blown out by the blast and glass littering the pavement.

A woman living nearby described how her house was shaken by the power of the blast. “It was unclear whether it was an accident. Then I felt the pressure wave through the open window, and heard and saw breaking glass. The house rattled,” Claudia Weber told Allgäuer Zeitung.

Another woman was seriously injured by the explosion and flown in a rescue helicopter to a clinic in Murnau.

Allgäuer Zeitung reports that the seriously injured woman is a cleaner who had just arrived at the Red Cross building. The explosion was triggered when she switched on the lights.

Experts are currently trying to expose the underground pipe to find the leak.