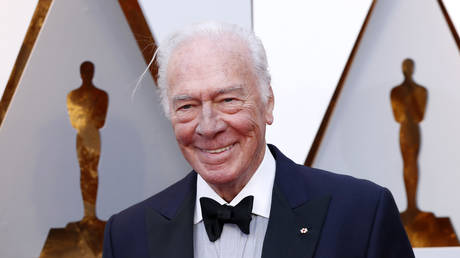 Canadian actor Christopher Plummer has died at the age of 91, his manager said on Friday. At 82, Plummer became the oldest actor to win an Oscar, when he took the best supporting gong for ‘Beginners’.

“Through his art and humanity, he touched all of our hearts, and his legendary life will endure for all generations to come. He will forever be with us,” Lou Pitt, Plummer’s manager for 46 years, told entertainment outlet Deadline in a statement.

Plummer was with his wife, Elaine Taylor, and Pitt at home in Connecticut when he passed away “peacefully.”

The actor was best known for his role in the classic musical ‘The Sound of Music,’ but has appeared in more than 100 film roles, and took part in numerous stage productions.

More recently, the actor starred in the hit film ‘Knives Out.’ He was also nominated for an Oscar for his role in the Ridley Scott-directed ‘All the Money in the World’, released in 2017. The film, and Plummer’s role in it, made headlines, as the actor was a last-minute replacement for Kevin Spacey, after the latter was accused of several sexual assaults. Spacey had already filmed his role as John Paul Getty III, and all of his scenes were reshot with Plummer mere months away from the movie’s release.

Plummer won an Oscar for the 2010 film ‘Beginners’ and was also nominated for 2009’s ‘The Last Station’. A Golden Globe, two Emmys, and two Tony Awards were also among his accolades.

The actor was raised in Montreal, Canada, but found success in acting in multiple countries, performing in both English and French. He began his career on the stage, appearing on Broadway in the US and in London’s West End, and worked with renowned directors throughout his career, ever since his first film appearance, in 1958, in Sidney Lumet’s ‘Stage Struck’.

Plummer was known for his biting honesty about his profession and also his colleagues, making headlines in 2012 for saying he’d never again work with director Terrence Malick after his experience on ‘The New World’.

“I love some of his movies very much,” the actor told a group of colleagues during a Newsweek roundtable, “but the problem with Terry is he needs a writer, desperately. He insists on overwriting until it sounds terribly pretentious … and he edits his films in such a way that he cuts everyone out of them.”

On accepting his Oscar for ‘Beginners’, Plummer – who remains the oldest actor to receive an Academy Award – joked while holding the statuette, “You’re only two years older than me, darling. Where have you been all my life?”

Plummer’s humorous and honest nature, coupled with his unmatched work over the course of decades in Hollywood, drew a flood of mourning on social media for the star, when news broke of his death on Friday.

The Sound of Music is a sad one today as Christopher Plummer has left us today. He was giant of stage and screen, winner of an Academy Award for “Beginners.” He died at age 91 with his wife of 53 years, Elaine Taylor, by his side. Rest in eternal music, Captain Von Trapp.