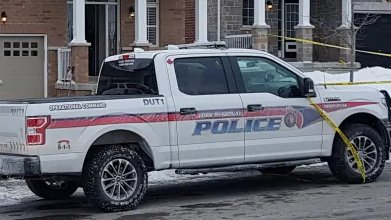 A heavy police presence remains in the small community of Mount Albert, more than 24 hours after a shocking crime left two people dead, including the suspect, and sent three others to hospital.

York Region Police were called to a home on Ridge Gate Crescent just before 2:30 p.m. Saturday for a report of a stabbing.

When they arrived they found a 38-year-old woman lying dead at the front door. Upon entering the home, they encountered a 37-year-old man. Following an encounter, the man was fatally shot by police.

A two-year-old boy, a four-year-old boy and a 35-year-old woman were taken to hospital with serious injuries. Police updated their condition on Sunday, saying they have improved and all are expected to survive.

A Zoom prayer service was held Sunday morning for the victims and neighbours could be seen stopping by throughout the day at the home where the grisly discovery was made Saturday.

“It’s a difficult piece of news to deal with in a small town like this,” neighbour Todd Morrison tells CityNews.

“As soon as you hear kids are involved your heart is gone. …It’s horrible, horrible,” echoed neighbour Christa Rose.

“The community is in a state of shock. This sort of thing has never happened before in our town, so we’re not quite sure how to process it. To see this tragedy happen in my town, just breaks my heart.”

The Special Investigations Unit has been called in to take over the portion of the investigation into the man’s death. They’ve designated two subject officers and one witness officer.

Mount Albert update: Victims in hospital, a 2-year-old boy, a 4-year-old boy and a 35-year-old woman are all now expected to survive. Our thoughts are with them on their recovery. Thank you to the paramedics, nurses, doctors, surgeons and all staff involved in their care.

The province’s Special Investigations Unit is investigating the circumstances surrounding an interaction today in East Gwillimbury that resulted in a 37-year-old man being fatally shot by police. https://t.co/XHs5enkNch

Outside of the SIU probe, York police are continuing to investigate the details that led up to the initial stabbing incident. They have yet to indicate what the relationship is between the suspect and the victim but indicated this was not a random act.