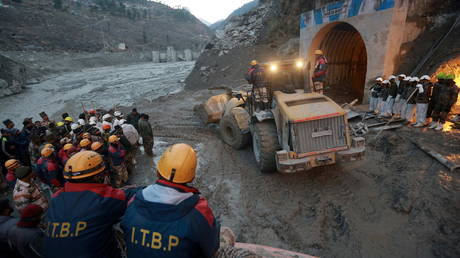 Extensive rescue efforts are still underway in northern India after a glacier burst caused a major flood and damaged a power plant under construction. At least 26 people died in the incident while almost 200 are still missing.

More than 2,000 people, including rescue teams, military forces, police and paramilitary groups were deployed to a remote mountainous region in Uttarakhand state on Sunday after a glacier burst caused a deadly flood.

Rescuers managed to save 16 people in the wake of the flooding that covered the Dhauliganga River valley with a thick layer of mud and debris. However, the number of those missing or feared dead has since risen to between 160 and 200, according to various estimates reported by local media.

Most of the missing are workers involved in the construction of two power plants in the valley. Authorities also reportedly fear for the safety of workers at road and rail projects in the area.

“If this incident happened in the evening, after work hours, the situation wouldn’t have been this bad as labourers and workers in and around the sites would have been at home,” Uttarakhand Chief Minister Trivendra Singh Rawat told reporters.

Around 30 workers are thought to be trapped in a U-shaped 2.5-kilometer-long tunnel at the Tapovan Vishnugad hydropower plant construction site. The tunnel filled with rocks and mud when the violent torrent of water hit the area.

Main entrance of the Tapovan tunnel being cleared by ITBP personnel with the help of machines. #Dhauliganga #Chamoli#UttarakhandGlacialBurst pic.twitter.com/KghoyyHheP

Scores of rescuers, including the military, are trying to break open the tunnel using heavy equipment and drilling units, as shown in footage published by the Ruptly video news agency.

“We expect to carry on operations for the next 24 to 48 hours,” said Satya Pradhan, the National Disaster Response Force head.

It is not yet clear what exactly caused the disaster. Some Indian media outlets reported that the mountainous area saw heavy snowfalls last week, some of which may have melted, causing the glacier burst and triggering an avalanche. The area is also reported to suffer frequent landslides and floods.