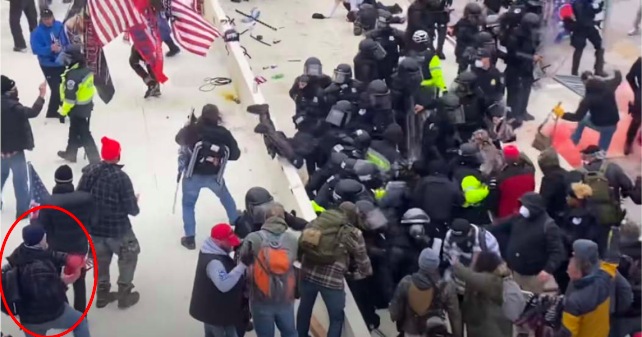 Since Donald Trump left office, most Republicans in Congress have backed away from holding him responsible for inciting the insurrection on January 6. Yet, with Trump’s impeachment trial, Democrats are set to highlight broad evidence of how the former president ignited the mob—some of whose participants said explicitly that Trump motivated them to act.

According to our investigation, of the 194 federal criminal cases brought against insurrectionists so far, at least 13 people charged cited Trump explicitly as the reason they marched on the Capitol. At least three suspects who said Trump compelled them to join the siege were seen in video footage amid violent altercations: One who allegedly struck a police officer with a fire extinguisher, another who allegedly struck an officer with a baseball bat, and another who was among a group breaching the Speaker’s Lobby doors just before one pro-Trump rioter was fatally shot by a police officer. Among those charged in the insurrection to date are at least five members of the neofascist Proud Boys, whose Long Island chapter announced on social media in December that Trump had given them “the green light” for January 6.

While many in the crowd of thousands who went from Trump’s rally at the White House to the Capitol building may not have broken laws, the mob comprised of people from across the country was united by a central narrative: Trump’s sustained lies about the presidential election being “stolen.” Dozens of those arrested indicated they were motivated by those claims from Trump.

As the Justice Department continues to build conspiracy cases, many of those arrested have been charged with a range of crimes including illegally entering restricted grounds; vandalism; intent to impede or disrupt the orderly conduct of Government; and carrying firearms or other dangerous weapons on Capitol grounds. Details on the Trump-motivated rioters below are drawn from federal charging documents, additional court filings and news reports.

“President Trump said to do so”

Robert Bauer of Kentucky, who entered the Capitol wearing a Trump 2020 hat, told investigators that he marched there at the behest of President Trump. According to a federal criminal complaint, Bauer said that “after President Trump told the crowd, ‘We are going down Pennsylvania Avenue to the Capitol,’ the crowd began moving towards the Capitol.” Then Bauer, his wife and his cousin proceeded to move with the crowd “because President Trump said to do so.”

Edward Hemenway, of Winchester, Virginia, made a similar statement to FBI agents, explaining that ‘during the rally President Trump said “something about taking Pennsylvania Avenue,” so he headed for the Capitol. Hemenway told investigators that he and Bauer (his cousin) stayed at a D.C. hotel the night before the insurrection because they “didn’t know what was going to happen [on January 6, 2021],” but had heard “crazy things” on social media.

“Followed the president’s instructions and [went] to the Capitol”

Robert Sanford, of Chester, Pennsylvania, was identified in video footage allegedly throwing what appeared to be a fire extinguisher at police officers, striking an officer in the head. According to an FBI statement of facts, investigators received a tip identifying Sanford and were told by the informant that Sanford said he had travelled to D.C. on a bus with a group of people. The informant said Sanford had disclosed that the group “had gone to the White House and listened to President Donald J. Trump’s speech and then had followed the president’s instructions and gone to the Capitol.”

Christopher Ray Grider, of Eddy, Texas, was captured on video inside the Capitol draped in a yellow “Don’t Tread on Me” flag, standing amid a group attempting to break into the Speaker’s Lobby where one rioter was fatally shot by police. According to an FBI affidavit, “Video footage also captured how Grider attempted to push open the doors and then kick the doors in an attempt to breach the entrance leading to House Chamber where members of Congress were located.” Grider was later interviewed by a Texas news station, according to the affidavit, where he was shown on camera saying, “The president asked people to come and show their support. I feel like it’s the least that we can do, it’s kind of why I came from central Texas all the way to DC.”

Jorge Riley, a Sacramento, California resident and former member of  the California Republican Assembly group, posted on Facebook the day before the insurrection, “Do you really not get what is going to happen on the 6th? I absolutely am looking forward to that and NO MATTER WHAT THERE IS NOTHING THAT CAN STOP IT!!!!” An FBI statement of facts says that Riley posted more than 150 messages, photos and videos between January 6 and January 8 describing his activities in DC, including a post the morning of the 6th stating, “I’m here to see what my President called me to DC for. Hello from Sacramento!!!” In video footage cited by investigators, Riley referenced election fraud as a reason he stormed the capitol: “We stopped the steal, because they were in there and they weren’t going to stop the steal, so we stopped the steal. We took our country back. Fuck you guys.”

“I was doing what [Trump] asked us to do”

Jennifer Ryan, a realtor from Texas who travelled to the Capitol on a private jet, defended her participation in the siege and called for President Trump to pardon her and others who took part. “I thought I was following my president. I thought I was following what we were called to do,” Ryan said in an interview with a local Dallas news station. “He asked us to fly there. He asked us to be there. So I was doing what he asked us to do.” A picture of Ryan at the airport on January 5 was posted on Facebook with a caption saying “We’re so excited! DC bound to #StopTheSteal.” Ryan also posted a video of herself recorded the morning of the siege saying, “We’re gonna go down and storm the capitol. They’re down there right now and that’s why we came and so that’s what we are going to do.” Late on Jan. 6, Ryan tweeted, “We just stormed the Capital. [sic] It was one of the best days of my life.”

Gina Bisignano, of Beverly Hills, California, was identified by the FBI in multiple videos encouraging rioters to bring weapons and fight Capitol police, and in other instances shouting grievances and conspiracy theories through a megaphone: “We the people are not going to take it anymore. You are not going to take away our votes….This is 1776, and we the people will never give up. We will never let our country go to the globalists.” According to charging documents, evidence in Bisignano’s case included a tweet posted on December 19, 2020 by President Trump: “Big protest in D.C. on January 6th. Be there, will be wild!” Binsignano replied in a tweet of her own: “I’ll be there.”

“Once we found out Pence turned on us”

Joshua Black, of Leeds, Alabama, said he joined in the storming of the Capitol to protest election theft. According to charging documents, Black described his experience in two YouTube videos he recorded after the insurrection, including one where he said he’d been “pretty upset” because “they stole my country.” Black said that Trump’s speech at the White House the morning of January 6, in which Trump scorned Vice President Mike Pence for failing to stop the election certification, fueled him and other rioters: “Once we found out Pence turned on us and that they had stolen the election, like officially, the crowd went crazy. I mean, it became a mob. We crossed the gate.”

“It’s only a matter of time, justice is coming”

Jacob Chansley, of Arizona, who stormed the Senate chamber shirtless while wearing a fur headdress and face paint, said he came to the Capitol at the behest of President Trump, who called for all “patriots” to come to D.C. on January 6. According to a detention memo filed in federal court, Chansley said he sat in Vice President Pence’s chair in the Senate chamber because Pence was “a child-trafficking traitor.” He also left a note for Pence saying “it’s only a matter of time, justice is coming,” but told investigators he didn’t mean the message as a threat.

“An event inspired by the President of the United States”

Emanuel Jackson, of Maryland, was among a crowd that brawled with law enforcement during the Capitol breach; he was seen in surveillance footage striking members of the U.S. Capitol and Metropolitan Police Departments with a baseball bat, according to charging documents. Jackson was captured on video saying he did not go to the Capitol because of Trump—but in response to charges for assaulting a police officer, Jackson’s lawyer says Jackson’s defense will rest on the argument that Trump is responsible for the insurrection because he invited Jackson and others to participate. “The nature and circumstances of this offense,” his lawyer said in a court filing, “must be viewed through the lens of an event inspired by the President of the United States.”

“Trump [told] the crowd to go to the U.S. Capitol”

Valerie Ehrke, of Arbuckle, California told investigators she did not plan to go to the Capitol when she arrived in D.C., but that after attending Trump’s “Save America” rally she took part in the siege “wanting to be part of what was happening,” according to charging documents. Ehrke told FBI agents that “She heard President Trump tell the crowd to go to the U.S. Capitol,” and said she later saw a story about how people were going into the building and “decided she wanted to be part of the crowd.”

“Await orders from our Commander in Chief”

According to federal charging documents, Daniel Goodwyn of San Francisco, is a “self-proclaimed” Proud Boy whose social media posts included the #stopthesteal hashtag and references to Trump’s widely known comments from fall 2020 that the Proud Boys should “stand back and stand by.” Goodwyn was seen on video entering the Capitol building wearing a MAGA hat and later exiting after an officer directed him out of the building. Investigators cited a tweet by Goodwyn from Nov. 7: He encouraged fellow Trump supporters to protest at their local state capitols and to “Await orders from our Commander in Chief.”

“The president is calling on us to come back to Washington”

Stephen Michael Ayers, of Warren, Ohio, talked in a YouTube video about breaching the Capitol building, according to a FBI affidavit. Ayers also posted multiple times on social media in advance of the insurrection about his plans to attend the “Save America” rally on January 6 and to “hear about [how] all the DS are being tried for treason!!” In a January 2 post cited by investigators, Ayers shared an image of a poster reading “January 6th Washington, DC, the president is calling on us to come back to Washington on January 6th for a big protest – ‘Be there, will be wild,” with a comment from Ayers that said “History is being made right in front of your eyes! When your grandchildren ask “Where were you when………..happened?” What’s your answer going to be?”