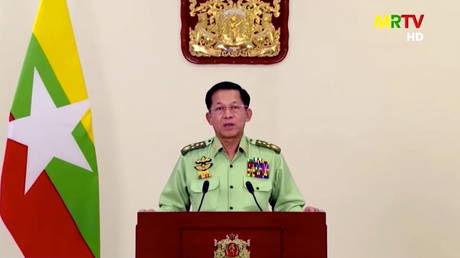 The leader of Myanmar’s military junta has pledged to hold a new election and cede power to the winner, in his first speech since deposing State Counsellor Aung San Suu Kyi’s elected government in a coup last week.

Addressing the country via state TV on Monday, military ruler General Min Aung Hlaing said Myanmar will become a “true and disciplined democracy”. He also accused Suu Kyi and other leaders, who are currently under house arrest, of failing to properly hold the general election in November last year.

Aung Hlaing ousted Suu Kyi’s government on February 1 after claiming her National League for Democracy Party (NLD) had rigged the vote, after it won in a landslide.

He also used his first speech since seizing power to say that Myanmar would repatriate thousands of Rohingya refugees currently in neighboring Bangladesh. From August 2017, more than 600,000 Rohingya Muslims crossed from Myanmar’s Rakhine State into Bangladesh after more than 280 villages in Myanmar were destroyed, according to Human Rights Watch.

Suu Kyi, who won the Nobel Peace Prize in 1991, has repeatedly denied accusations from the United Nations and human rights groups that Myanmar’s armed forces committed genocide against the Rohingyas.

She remains a popular figure among the public, and since her detention thousands of people across the southeast Asian country have come out to protest the coup. On Monday tens of thousands of people came together for a third consecutive day of mostly peaceful protests. In the capital, Naypyidaw, police used a water cannon to disperse demonstrators.

A nationwide general strike has also been called to oppose the military junta, which has banned Twitter and Facebook in an effort to crack down on dissent.

Suu Kyi was arrested last week after police said they found non-authorized walkie talkies, used by her bodyguards, at her home. She will remain under house arrest at her Naypyidaw home until February 15, police said. Myanmar’s President Win Myint was also detained, along with at least 130 other people, according to local activists.