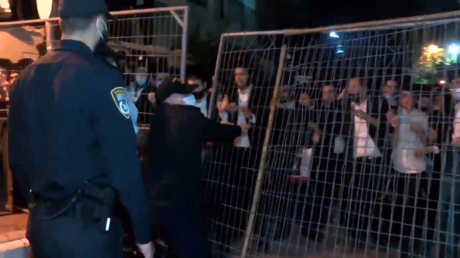 Members of Israel’s Orthodox Jewish community took down metal barriers and clashed with police at the funeral of a senior rabbi who passed away due to Covid-19.

Footage from Ruptly video agency shows police officers trying to push back a crowd of young men from the ultra-Orthodox Jewish community.

People took to the streets in the city of Bnei Brak, a Haredi Tel Aviv suburb, on Sunday night to attend the funeral of senior rabbi Chaim Meir Wosner, in violation of the Covid-19 restrictions.

Police put up several barriers around the procession site, which were later taken down by the funeral-goers.

Wosner, the dean of the Chachmei Lublin Yeshiva, contracted the coronavirus last month and succumbed to the disease on Sunday. According to the Times of Israel, police tried to negotiate with the local religious community in order to dissuade them from mass gatherings, but the talks were unsuccessful.

Orthodox Jews have defied public health protocols in the past by holding mass funeral processions and participating in anti-lockdown protests.