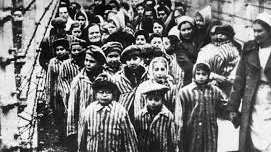 German prosecutors have charged a 100-year-old man with aiding and abetting murder at the Sachsenhausen death camp. The suspect was a guard at the infamous Nazi camp where 100,000 perished.

The man, who resides in the state of Brandenburg, not far from Berlin, stands accused of complicity in 3,518 cases of murder, Germany’s NDR broadcaster reported on Monday.

The 100-year-old is said to have “knowingly and willfully” contributed to murder of inmates in Sachsenhausen, where he served as a security guard between 1942 and 1945.

The concentration camp located in north-eastern Germany was a place where the Nazi regime imprisoned some 200,000 people, including political dissidents, Jews, Poles, and Soviet prisoners of war – including Stalin’s son Yakov Dzhugashvili, who died there in 1943.

Sachsenhausen had a gas chamber and a medical experimentation area among its subcamps. An estimated 100,000 people who were imprisoned there died, in part due to diseases, medical experiments, and unbearable slave labor conditions.

German prosecutors believe that the former guard can still stand trial despite his advanced age. A local court must now decide whether to allow it.

“For the elderly survivors of the German concentration and extermination camps, this process is also an important example of the fact that justice has no expiration date and the persecution of the SS perpetrators must not end even in old age,” Christoph Heubner of the International Auschwitz Committee said about Monday’s indictment.

German law enforcement officials are currently investigating several other cases related to Nazi death camps during the Second World War. At least nine preliminary investigations are underway, the head of the Central Office for the Investigation of National Socialist Crimes in Ludwigsburg, Thomas Will, told local media.

Last year, a former guard at the Stutthof concentration camp was handed a two-year suspended sentence over complicity in the murder of 5,232 people at the facility near the present-day Polish city of Gdansk. The defendant was in his 90s at that time of the verdict.

A woman who worked at Stutthof as a typist was charged with complicity in the murder of 10,000 people last week. German media identified her only as the 95-year-old Irmgard F. It is unclear if the care home resident will face trial.