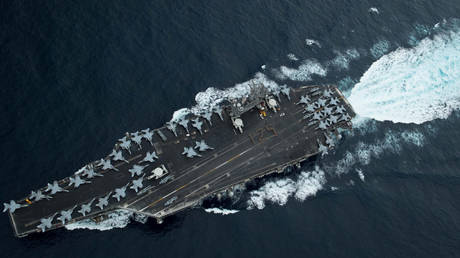 Two US carrier strike groups have conducted joint exercises in the South China Sea. This new muscle-flexing comes days after the US buzzed China-controlled islets in the disputed waters, prompting anger from Beijing.

The two groups, led by the USS Theodore Roosevelt and USS Nimitz aircraft carriers, trained in the South China Sea on Tuesday, the US Navy said in a statement. The joint exercise in such a “highly trafficked area” was designed to “demonstrate the US Navy’s ability to operate in challenging environments.”

“Through operations like this, we ensure that we are tactically proficient to meet the challenge of maintaining peace and we are able to continue to show our partners and allies in the region that we are committed to promoting a free and open Indo-Pacific,” said the commander of the USS Theodore Roosevelt carrier group, Rear Adm. Doug Verissimo.

The massive exercise comes days after a US destroyer, the USS John S. McCain, sailed past the Chinese controlled Paracel Islands in the first so-called “freedom of navigation” operation since new President Joe Biden took office. The destroyer’s cruise has been condemned by Beijing as hostile, with China’s Foreign Ministry urging Biden’s administration to “play a constructive role for regional peace and stability” instead of stoking tensions.

“China will continue to maintain a high level of alert at all times, respond to all threats and provocations at all times, and resolutely defend national sovereignty and territorial integrity,” the ministry’s spokesperson said.

The South China Sea has been a constant source of tensions between the US and China for the past few years. Washington has repeatedly sent naval convoys into the region, justifying them with the supposed need to protect “freedom of navigation” in the area. The operations have resulted in multiple incidents between the Chinese and US militaries.

The resource-rich region of the South China Sea is the subject of overlapping territorial and maritime claims by multiple nations, including China, Vietnam, the Philippines, Malaysia, Indonesia, and Brunei. The troubled seas are also an important international waterway, enjoying trillions of dollars’ worth of maritime traffic flowing through each year.