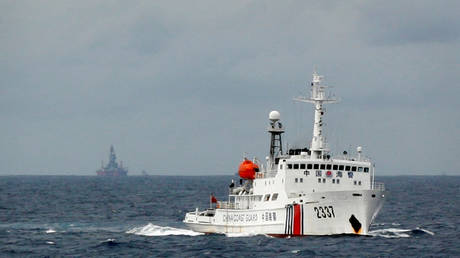 The Philippines’ new military chief says Manila will increase naval forces to protect fishermen after China tells its coast guard to fire on boats in territorial waters it claims.

Manila’s announcement comes at a time of rising tensions in the region and with two US carrier strike groups currently in the South China Sea on joint exercises.

The Philippines have objected to an “alarming” new Chinese law that came into effect on February 1 that allows its coast guard to open fire during incursions by vessels into waters Beijing claims for itself.

The Philippines also stressed its people aren’t going to these waters to wage war, but to earn a living.

“We will increase our visibility through the deployment of more naval assets, but I just want to make clear our navy presence there is not [to] wage war against China but to secure our own people,” Lieutenant General Cirilito Sobejana said in a media briefing in Manila.

China’s embassy in Manila did not immediately respond to the general’s remarks, but last week it commented on the new coast guard law on its Facebook page, calling it “a normal domestic legislative activity of China.”

China, Vietnam, the Philippines, Malaysia, Indonesia, and Brunei have competing territorial and overlapping claims to the resource-rich region of the South China Sea. It’s also an important international waterway.