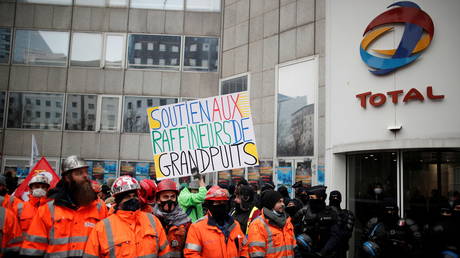 Protesters have clashed with French police outside of Total’s head office in La Defense, Paris as striking employees and climate activists accuse the oil giant of jettisoning jobs while failing to protect the environment.

Employees of the Grandpuits refinery, who have been striking for five weeks following the announcement that the plant would be converted into a ‘zero oil platform’ with the loss of more than 700 jobs, were joined by climate activists and Greenpeace protesters on Tuesday.

Videos from the scene show protesters battling with police, while activists cover Total’s HQ with posters and slogans.

Some posters bore the message “700 jobs threatened versus 7 billion dividends” – a reference to Total’s decision to write-down billions of debt in 2020 in a move that did not impact share prices for its investors.

Paul Feltmann, elected CGT union (General Confederation of Labor) representative for the Grandpuits refinery, told RT France: “Total will cut jobs, ours! It is their plan to cut jobs that will impact 200 direct jobs and 500 indirect jobs.”

While the conversion of the refinery threatens hundreds of workers, Greenpeace claims that the plant retrofit is actually only ecological in name. Climate activists Friends of the Earth say the conversion is designed for production of agrofuels, which they say is “in no way a solution to decarbonize the transport sector, causing induced deforestation and a change in land use”.

A large banner with the inscription “Greenwashing and social disruption: Total does the dirty” was held aloft by some of the protesters at Tuesday’s action.

The protests were also attended by trade union leaders. “I think that the future is more for those who fight to keep their jobs and to defend the planet rather than to those who think only of their profit,” said the secretary general of the union ‘CGT’, Philippe Martinez.

In September, Total announced that it would be investing more than €500 million in converting the refinery into a “zero-crude platform” for the production of biofuels and bioplastics, with the plant ending its crude oil refining operations in the first quarter of 2021.