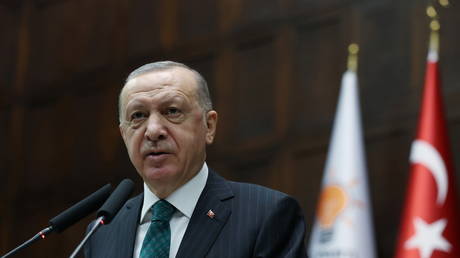 Turkey’s President Recep Tayyip Erdogan has dismissed Greek proposals to turn the divided island of Cyprus into a federation, insisting the only viable option is to create two separate states.

Erdogan lashed out at Greek PM Kyriakos Mitsotakis as he spoke at a meeting of his ruling Justice and Development (AK) Party on Wednesday. Turkey’s president accused the Greek leader of jeopardizing dialogue attempts between the two countries.

Even though we agreed to continue explanatory talks with Greece in March, Mitsotakis targeted us once again. Now, how can we continue our talks?

The remarks came in response to Mitsotakis saying the only viable option to fix the Cyprus issue and end the decades-old frozen conflict is the creation of a united state on the island. The state should be a “bizonal, bicommunal federation with political equality,” he said on Monday, stressing that it may be achieved only when the “Turkish occupation” of the north ends.

But Erdogan has criticized this approach: “The Greek side has not made the slightest change in its stance disregarding the existence of Turkish Cypriots on the island,” the president stated.

Two-state solution is the sole option for Cyprus, federal system is no longer an option on agenda.

Turkey’s president also did not miss the opportunity to take fresh shots at the EU. Erdogan urged Mitsotakis to “know his limits” and not to put his trust “in some places,” referring to the EU, as “those whom you trust have already failed you.” Unlike Greece, Turkey does not seek anyone’s help to secure its interests, he added, promising the country will continue to “stand up for itself.”

Ankara’s relations with the EU have been in a perpetual downward spiral for some time, with the EU and Turkey clashing on different issues ranging from Turkey’s oil and gas exploration in contested waters of the eastern Mediterranean to Ankara’s role in the Libyan conflict.

The Mediterranean island of Cyprus has remained divided since the Turkish invasion of 1974, with its north controlled by the unrecognized Turkish Republic of Northern Cyprus.