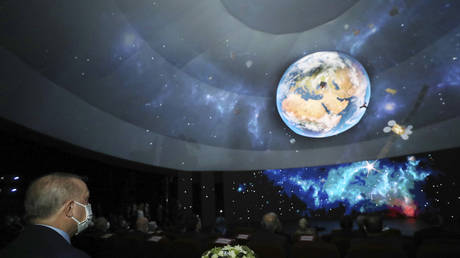 The bold plan was unveiled Tuesday evening in an extravagant ceremony in which Erdogan vowed his country would make “first contact with the moon” in 2023 to mark the centennial of the founding of the Turkish republic.

“God willing, we are going to the moon,” Erdogan said.

The first stage of Turkey’s venture into space will involve “international cooperation” with a follow-up mission planned using Turkish rockets.

Erdogan also added that Turkey’s space agency (TUA), founded in 2018, plans to cooperate with the international community on the construction of a spaceport.

“I hope that this roadmap, which will carry Turkey to the top league in the global space race, will come to life successfully,” Erdogan added.

Though some were skeptical, proponents argue that it will reduce the brain drain currently taking place in the Turkish economy and encourage more science and technology innovators to remain and bolster the country’s standing in the international space exploration community.

Specific details were sparse during the announcement though Erdogan is reported to have had a recent phone conversation with the world’s richest man, and SpaceX founder, Elon Musk to discuss the development of space technology with input from Turkish companies.

Meanwhile an unmanned Chinese spacecraft has entered orbit around Mars, just one day after another spacecraft, Amal, from the United Arab Emirates took up position above the Red Planet.

The US Perseverance rover is aiming to touch down on the Earth’s closest planetary neighbor on February 18 to hunt for signs of ancient microscopic life and collect samples for return to Earth in the next decade.