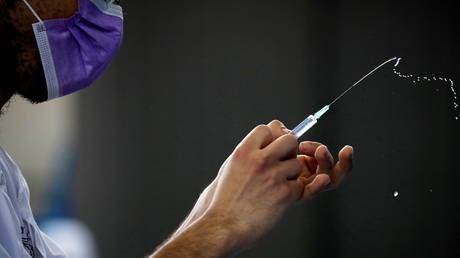 After facing a backlash for its reluctance to extend coronavirus vaccinations to the Palestinian territories, Israel has finally started administering Covid-19 jabs to Palestinians, but only if they legally work in Israel.

The vaccination of Palestinians was launched on Wednesday at a medical station of Israeli Red Cross affiliate Magen David Adom in Qalandiya village, near the main checkpoint between Jerusalem and the West Bank.

“Palestinians can come and be vaccinated, including those who have Palestinian Authority identity cards and work permits,” a Magen David Adom spokesperson said. “This initiative represents the first official step aimed at vaccinating Palestinians working in Israel.”

Some 400 people received their coronavirus shots on Wednesday, The Times of Israel newspaper reported.

The vaccination was initially planned as a one-day event, but according to i24NEWS, the medics will return to the same spot next week with more immunization supplies.

Around 120,000 Palestinians legally work in Israel or in Jewish-occupied West Bank settlements, according to government data. Israeli health officials have recently voiced concerns that the movement of these workers across the ‘Green Line’ could facilitate the spread of the coronavirus on Israeli territory.

Israel launched a major vaccination campaign in December which has by now resulted in more than two million people receiving their second shot of the Pfizer jab. However, throughout the campaign, Palestinian officials and human rights groups criticized the Jewish state for its unwillingness to immunize residents in the occupied West Bank and Gaza.

But the Israeli authorities claimed that it wasn’t their responsibility, and said they would share spare vaccine doses with the Palestinian people after the inoculation of Israeli citizens is completed.