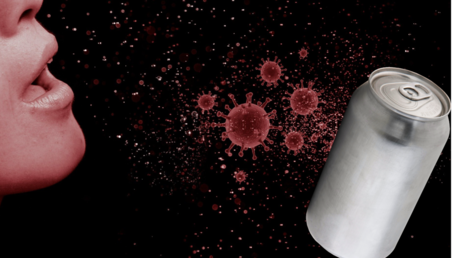 Bath University mathematician Kit Yates has made the rather fanta-stical claim that all of the coronavirus particles present in the world at any given moment would fit inside a soda can, with room to spare.

Factoring in global rates of infection, case numbers and estimations of viral load, Yates calculates that there are somewhere in the region of two quintillion, or two billion billion, SARS-CoV-2 virus particles in existence at any given moment.

The total volume of SARS-CoV-2 in the world could fit inside a can of cola.https://t.co/T6KbBrDi1z

Yates’ calculations assumed a diameter of 100 nanometers, or 100 billionths of a meter, per SARS-CoV-2 virus particle. From this total, he derived the spherical volume, including the infamous spike proteins which make the pathogen such an implacable foe.

Accounting for all fizz-ical characteristics of the virus’ structure, and allowing for spacing between the virus particles, the total volume was still less than that of a 330ml soda can.

“It’s astonishing to think that all the trouble, the disruption, the hardship and the loss of life that has resulted over the last year could constitute just a few mouthfuls,” Yates said, in a statement that was rather hard to swallow.

At least 2.34 million people have died due to the Covid-19 pandemic so far, with over 107 million confirmed cases worldwide.