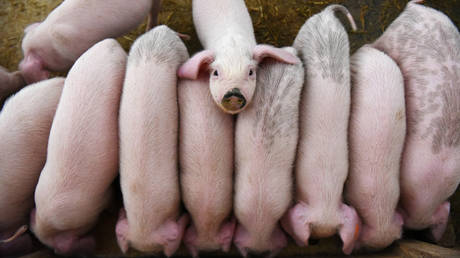 The entire stock of a pig farm in Hong Kong has been ordered to be culled after a rare outbreak of African swine fever was detected in the Chinese autonomous region. While the disease is deadly for pigs, it does not affect humans.

The killing was ordered by local authorities late on Tuesday after previous attempts to contain the outbreak failed. The disease was first detected at a farm located in the north last week, prompting the culling of 240 pigs and then a further 590.

Despite this, the fever continued to spread across the facility, the Agriculture, Fisheries and Conservation Department said.

“The department will cull the remaining 3,000 pigs in an orderly manner as the ground situation allows and as soon as possible,” the department’s spokesperson said, as quoted by local media. “The owner will be compensated according to the established mechanism.”

So far, the outbreak hasn’t spread outside the farm, and pigs at nearby facilities have tested negative for the virus. Hong Kong has some 43 pig farms, which only account for about 15 percent of its needs, and the region is heavily dependent on live swine imports.

African swine fever has repeatedly decimated pig stock in mainland China, where it is endemic and has severely damaged its pork supply over the past few years. It is still a rare occurrence in Hong Kong.

The last major outbreak there was in 2019 and was triggered by swine imports from the mainland. It was stopped with the culling of 10,000 pigs across the region.