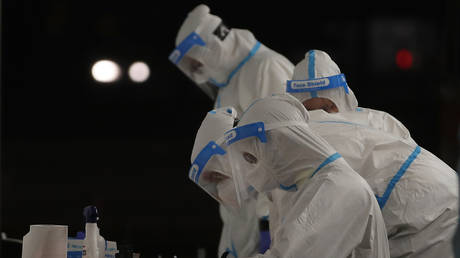 New research from India suggests that a deficiency of the protein Alpha-anti-trypsin (AAT) in populations across Europe and North America may have contributed to the comparatively rapid spread of Covid-19 when compared with Asia.

Published in the journal Infection, Genetics and Evolution, the new study examines the role played by a lung-protecting protein in the spread of the pandemic in the West compared with Asia.

Specifically, researchers at the National Institute of Biomedical Genomics (NIBMG) in Kalyani, West Bengal examined the means by which the D614G mutation, predominant in the first waves in Europe and North America, spread so fast.

The researchers caution that their analysis focuses more on the transmissibility and spread of the pathogen through the body, but not necessarily on the severity of the disease in each region.

“For the coronavirus to enter cells, its spike protein binds with the ACE2 receptor in human cells, and the human enzyme TMPRSS2 cleaves at the junction of two subunits S1 and S2 of the protein, enabling the virus to fuse with the cell,” said the study’s corresponding author Nidhan K. Biswas from NIBMG.

The D614G mutation in the spike protein affords the virus an additional point of entry into human cells.

The protein neutrophil elastase cleans up bacterial infections in the lungs, but high levels can do more harm than good.

Therefore this protein is moderated by AAT, whose primary function is to reduce tissue damage and inflammation in the lungs.

However, the delicate balance between these two is off across large swaths of the European and North American populations due to a deficiency in AAT, most notably in Italy and Spain, the one-time epicenters of Covid-19 in Europe.

“The issue is that individuals with AAT deficiencies have high neutrophil levels and if they are infected with the SARS-CoV-2 virus with the D614G mutation, their cells can quickly take the virus up and into the whole system,” the researchers say.

This deficiency, in combination with a variety of other factors, might explain the comparatively rapid spread of this, and other mutations of the coronavirus across Europe and the US, including the newer UK and South African variants, both of which boast the same “backbone” as the D614G mutation.

The scientists suggest that, following more in-depth research and subsequent analysis, AAT supplementation may form a part of future preventative measures to combat the pandemic.