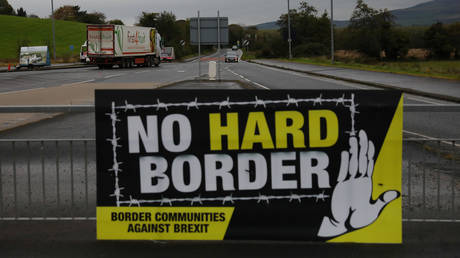 Ireland’s prime minister has said that both London and European Union member states need to “dial down the rhetoric” and return to constructive dialogue in order to overcome challenges relating to the Northern Ireland Protocol.

“There are bound to be issues and teething problems [with the post-Brexit arrangement] and certain people were not as prepared as they could have been,” Irish Prime Minister Micheal Martin told RTE radio on Thursday, but he urged all parties to commit to fine-tuning the protocol.

There [are] elements that the British government could sort out, but likewise on the European side, I would say some member states need to cool it as well.

On Thursday, Sefcovic accused Britain of failing to implement a number of obligations, including the introduction of checks on live animals entering NI from Britain, under the Northern Ireland Protocol. He warned London that extensive changes to the protocol would not be possible.

Tensions were heightened in late January when the bloc decided to trigger Article 16 and introduce customs checks on the island of Ireland to prevent vaccines from leaving the EU. The decision was quickly reversed but angered many in Ireland and the UK.

In early February, EU customs officials based at ports in Northern Ireland were temporarily withdrawn amid security concerns and an upsurge in sinister behavior. Local authorities had already withdrawn staff temporarily and suspended post-Brexit physical inspections of products of animal origin at the ports of Larne and Belfast.

Martin added the EU’s quarrel with AstraZeneca over Covid-19 vaccine supply had escalated too far and claimed, “the manifestation of Brexit has brought challenges to everyone.”