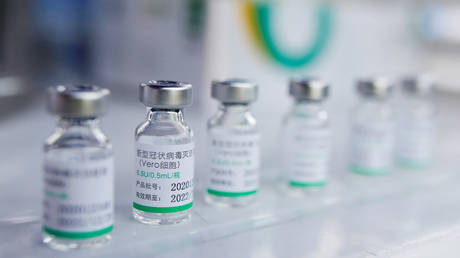 The Hungarian government has announced that a shipment of 500,000 Chinese Covid-19 jabs will arrive in the country next week, as Budapest looks to distance itself from Brussels’ stuttering vaccination program.

“The country has contracts with the Russian and Chinese parties to increase vaccine procurement. More than 30 million people around the world have already been vaccinated with the Chinese vaccine and 500,000 doses will arrive in Hungary next week,” said Gergely Gulyas, the Prime Minister’s chief of staff, on Thursday.

Gulyas told reporters that the jab, developed by Sinopharm, will be tested on arrival and if approved, it will be ready for use as soon as possible. The prime minister’s chief of staff conceded that the jab did not come cheap, saying, “the price of the Chinese vaccine is over ten thousand forints, but that is not a consideration, because dozens of people still die today.”

He also said that the country remains in talks with other vaccine manufacturers.

Gulyas said more than 300,000 jabs have been administered in Hungary so far and in the best-case scenario, the country hoped to vaccinate two million people before the end of March. “The end of April may be the earliest time we can vaccinate everyone, but that’s an optimistic scenario,” he added.

In January, Hungary became the first nation in the EU to register a Chinese-made Covid-19 vaccine amid very public supply challenges in the EU’s vaccine procurement program.

On Wednesday, the European Commission president, Ursula von der Leyen, defended Brussels’ decision to lead a collective, EU-wide approach to vaccine procurement and deployment but admitted the body had been overly optimistic and too slow to authorize the jabs.

Despite shortcomings in the EU’s inoculation program, Brussels prohibited member nations from making their own deals with vaccine providers. Budapest has elected not to heed its warning.