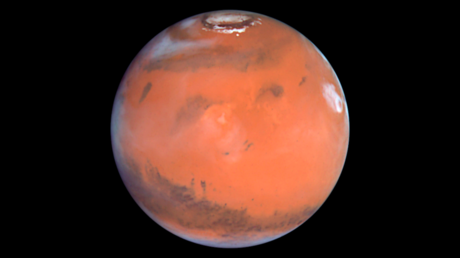 Researchers using the joint Russian-European ExoMars Trace Gas Orbiter have detected water vapor ascending to the upper atmosphere of Mars, adding further to the body of evidence that the Red Planet was once partially blue.

A slew of orbital and rover research has been dedicated to examining traces of ancient river valleys which have long indicated that water once flowed across the surface of Mars.

New research by two scientists at Britain’s Open University, published in the journal Science Advances, suggests the presence of hydrogen leaking from the planet’s atmosphere.

📢 Hello Earthlings! In between celebrating the new mission arrivals at #Mars, I have TWO exciting science results to share with you from my mission! 🥁🥁🥁

🧵Thread coming up, but if you can’t wait… skip to the full story here 😉 👉 https://t.co/rAtN7q1XR1#ExploreFarther pic.twitter.com/StjJNJlCxy

The pair analyzed light passing through the atmosphere using an instrument called the Nadir and Occultation for Mars Discovery on board the ExoMars Trace Gas Orbiter.

Water is a key ingredient for life, as we know it at least, so tracing its origins and the history of its disappearance from the Red Planet will be crucial to any colonization plans, while also potentially yielding insights as to the fate of our own planet.

“Measuring water isotopes is a crucial element of understanding how Mars as a planet has lost its water over time, and therefore how the habitability of the planet has changed throughout its history,” says Manish Patel, senior lecturer in planetary sciences at the Open University.

I’ve been studying water vapour and ‘semi-heavy’ water 💧(where one hydrogen atom is replaced by a deuterium atom, a form of hydrogen with an additional neutron)…https://t.co/oWIIEasyJA pic.twitter.com/b35w38RT22

We know that the majority of Mars’ remaining moisture is locked up in its polar ice caps, spurring some questionable, but likely tongue-in-cheek, ideas about nuking them to terraform the planet for human habitation.

On Wednesday, China’s Tianwen-1 probe joined the UAE’s Hope orbiter in orbit above the Red Planet, deploying yet more of Earth’s resources into discovering what exactly happened to our nearest planetary neighbor and potentially paving the way for human colonisation in coming decades.