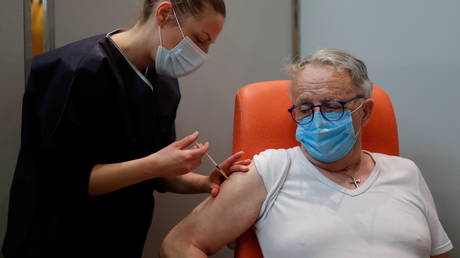 France’s public health authority HAS (Haute Autorité de Santé) has recommended that just one shot of a Covid-19 vaccine be given to people who have previously contracted the virus, instead of the two currently being administered.

People who have already caught Covid-19 should wait for three to six months before being immunized with a single dose, but not longer, the HAS said in an opinion released on Friday.

The HAS is a scientific advisory body, meaning that the French government will now need to decide whether to deviate from France’s current vaccine rollout and take up its recommendation.

France is rolling out three different two-dose Covid vaccines, made by Pfizer-BioNTech, Moderna, and the AstraZeneca/Oxford University partnership.

The HAS statement says those who have tested positive for Covid-19 are protected by an “immunity memory” for at least three months, meaning that a single vaccine dose effectively acts as a “booster” jab.

Exceptions to the proposed dosing regimen include those who have caught Covid in the days after they received their first dose of a vaccine and people with immunosuppressive conditions, who should be vaccinated with two doses.

The recommendations state that those who are infected soon after being immunized should wait three to six months after being infected before receiving their second vaccine dose.

People most at risk of severe disease, such as the elderly and those with underlying health conditions, should still be prioritized to receive the protective jabs, according to HAS.

Under the proposal, people who suffered prolonged Covid symptoms would need to be individually assessed by a specialist before opting to take only a single shot of the vaccine.

The HAS recommendations are based on the findings of the French-language Infectious Pathology Society (SPILF) and data regarding the Pfizer-BioNTech vaccine.

Since France launched its two-dose vaccination program on December 27, at least 2 million people have received their first dose and more than 500,000 have gotten a second jab.