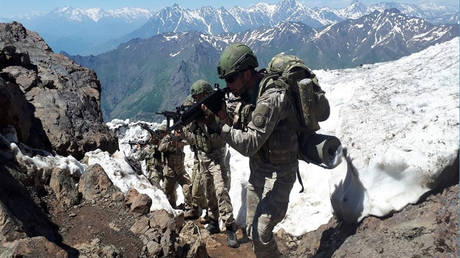 Turkey is set to expand its military operations in northern Iraq against Kurdish militants, President Recep Tayyip Erdogan told his AK party supporters on Tuesday, as he chided Western nations for failing to condemn terrorism.

Speaking in the Black Sea province of Trabzon, the Turkish president told his ruling AK Party’s congress there would be no let-up against the outlawed Kurdistan Workers Party (PKK), which Ankara accused of killing 13 Turkish police and military hostages on Sunday in a cave in the Gara region of northern Iraq. The PKK claimed the hostages were killed by Turkish airstrikes.

“We will expand our operations into areas where [PKK] threats are still dense,” the president said. “We will stay in the areas we secure as long as necessary to prevent similar attacks again.”

Erdogan also blasted Western nations for failing to condemn the Kurdish militants, telling his supporters that if the killing of hostages happened in the West, “you would not stay quiet.”

Turkey summoned the US ambassador in Ankara on Monday, saying Washington’s statement on the killings was “a joke.” US Secretary of State Antony Blinken also spoke with his Turkish counterpart after the initial reaction from Washington did not categorically blame the PKK for the killings.

The PKK has also been designated a terrorist group by the US, UK, and EU. More than 40,000 people have been killed, mainly in southeast Turkey, over the past four decades in the ongoing Turkish-Kurdish conflict.