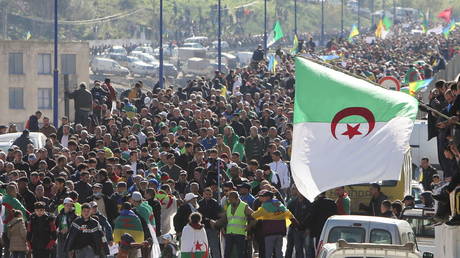 Algerians have taken to the streets in their thousands in the northern town of Kherrata, demanding political change on the second anniversary of the mass ‘Hirak’ protests that started in the town and spread across the country.

Tens of thousands of demonstrators gathered in Kherrata on Tuesday, chanting “A civilian state, not a military state” and “The gang must go,” as they sought to revive the mass protests that swept across Algeria in 2019, eventually causing the resignation of long-standing President Abdelaziz Bouteflika.

#Algeria ??: for the first time in months thousands of Algerian protesters are out again.

They’ve gathered in the town of #Kherrata to mark the second anniversary of the #Hirak movement pic.twitter.com/c0wfNS7xgZ

The Hirak movement started after Bouteflika announced he would be running for a fifth term in office, but the demonstrations continued even after his resignation in early April 2019, as protesters demanded all top-level insiders step down.

“We came to revive the Hirak that was stopped for health reasons. They didn’t stop us. We stopped because we care for our people. Today, coronavirus is over and we will get the Hirak back,” a protester told Reuters.

Videos show crowds gathering in the town’s main square, where the protests initially kicked off in 2019. In some footage shared to social media, protesters can be heard chanting “The secret service controls Algeria” and “Long live free Algeria.”

Bouteflika was succeeded by Abdelmadjid Tebboune in December 2019 after delayed elections in a vote that Hirak supporters dismissed as a charade. President Tebboune publicly praised the Hirak movement, but has made only limited reforms since taking office. Mass protests continued after his accession, but they were stopped a year ago amid public health concerns as the Covid-19 pandemic spread across the globe.